Start of school year is an adventure 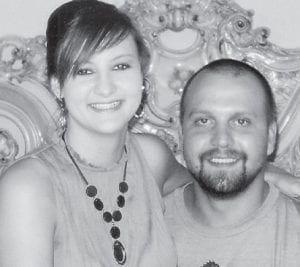 TO BE WED — Donnie and Missy Taylor Quillen of Neon, announce the engagement and forthcoming marriage of their daughter, Patience Taylor, to Will Niece, son of Jerry and Kathy Barnette of Wise, Va., and the late Rickey Niece. He is also the father of Willie Niece, 8, and grandson of T.J. and Lena Parsons of Beaver Dam and the late Wilford Niece. The bride-elect is the granddaughter of Edwin and Neida Taylor of Goosecreek and Sally Taylor of Whitaker. The wedding ceremony is planned for September 4. The couple will take a honeymoon trip to Myrtle Beach and will reside in Isom.

I hope this finds each and every one of you doing well! Michael, the boys, and I are doing just dandy. We are attempting to get back on track with our normal routine since school has started back. It has certainly been an adventure, that is for sure. Bailey is in the fourth grade this year and Dalton started kindergarten. Bai was eager to see his friends, but Dalton was apprehensive. He cried every day the first week, but this past week he only cried a couple days. I am hoping we have no tears at all this week. Wish us luck!

I am sorry that I haven’t been able to sit down and write for a while. We have been swamped with life again. Last minute school shopping and school starting back, cranky mornings, early bedtimes, family reunions, car troubles, and everything in between have certainly kept me busy. I honestly would have forgotten to write again today if Mom hadn’t mentioned it. Thanks for reminding me, Mom. I swear sometimes I think I would forget my head if it wasn’t attached to my neck.

August 21 was my oldest son Bailey’s birthday. He is now nine years old. It just does not seem possible. My baby is growing up on me. Seems like just yesterday he was a chubby little bundle in my arms. All Bai asked to do was spend the night with my brother Ward and his wife Dwana. Once Dalton found out Bai was spending the night, he had to go too. It was strange to walk around Riverside Days without them. I caught myself looking around for them as if they were missing several times. They had a blast at Ward’s house, and Michael and I really enjoyed listening to AfterShock play.

Our annual Halcomb/ Blair family reunion was on Saturday, August 7, at the Cowan Community Center. There were several family members in attendance this year that had never been able to attend before. It was very nice to catch up with everyone. If everyone who attended signed the book, we had 111 family members show up.

We were thrilled to have each and every one of you there with us. The weather was beautiful that day, and the kids had as much fun playing outside as the adults did visiting with each other. Many thanks to each of you for being there, especially those who had to drive lots of miles, brought food/donated money, or helped with set up and clean up. We really appreciate all the extra effort. I hope to see you all again there again next year plus more.

After our family reunion, Grandma, Lucy Halcomb- Blair, was sick and in the hospital for about a week. She had been having some stomach problems and needed blood. She fell and bruised herself up, too. Her daughters Edna Helton and Kitty Emmons extended their visit for a few extra days so that they could be at the hospital with her. She is home now, and doing some better. I went down last week and cleaned some for her. I am thankful that I am able to help her out, at least a little.

My sister, Opal Jent, said that she visited with Wilma and Jake Halcomb at their home, and that they are both doing pretty well. Wilma had been in the hospital a couple times recently, but is home and doing better now.

Opal visited with Bob Adams at the nursing home and said that he looked good. She also mentioned that Ellen Combs, wife of Earl Combs from Carcassonne, is still in the hospital.

Mom called earlier and was telling me that Ila Adams had a biopsy done and should hear the results soon. I hope she receives good news. Also, Mitch Caudill has been real sick.

Una Stickel of Jeremiah died Monday, July 26. She was 75 years old. Una was the daughter of the late Watson and Francis Adams Blair. She was the widow of Leonidas Joe Stickel. Surviving is a brother, Shade Blair of Cecil, Ohio.

Please say a prayer for the families. Losing a loved one is never easy.

On Sunday, September 5, there will be a memorial and reunion at the Johnny Blair-Henry Adams Cemetery on the left-hand fork of Blair Branch. Church will begin at 9:30 am. There will be a potluck dinner and reunion immediately following. Lovell Blair, Ila Adams, Mae Blair, and Minnie Blair are the surviving children of Johnny and Polly Blair. They and their families host the get-together. Come out and share your family memories. You are sure to hear the gospel, have a full stomach, and a thoroughly enjoy yourself. Maybe we will even play a few games of washers.

Vette Caudill mentioned that this year the family will be having an auction in order to raise money for the next year. She said, “Everyone bring something to auction off . You don’t have to go out and buy something, just bring something you already have or something that you have made.”

On August 28, there will be a memorial service at the Artie Caudill Cemetery at Redstar. The service will start at 5 pm.

I would like to say belated happy birthday to Charlene Halcomb, Ryan Phillips and Robbie Williams, who celebrated their birthdays on Aug. 6; Kenneth Hensley, Aug. 8; Wayne Watts, Aug. 12; my son Bailey McKenzie Couch, Aug. 21; Chris Back and Alyssa Maggard, Aug. 22; and Deidra Cook Layne, Aug. 23. Logan Hensley and Kory Whitaker are celebrating their birthdays today (Aug. 25); Becky Ingram and Kevin Blair, Aug. 26; Nancy Collie and Misty Hensley, Aug. 27; Ashton Whitaker, Aug. 28; and Dylan Blair on Aug. 30. I hope your special day is filled with all the love and laughter in the world.

Michael and I celebrated our wedding anniversary on August 13. We have been married for 10 years now. It doesn’t seem like it has been that long since we were dating, but I guess it has. I am very thankful and blessed to have Michael in my life. He is an amazing husband and father.

I would like to wish my nephew Gardner Allen Jent and his wife Jessica Hall- Jent a happy anniversary. They celebrated their special day on August 15. Roy and Lena Dixon and Tony and Amanda Blair celebrated their anniversaries on that day as well. I hope each of you have many more happy years together.

If I have left anyone or anything out, just let me know and I will be glad you get you next time. I hope everyone has a healthy and happy week. If you would like to contact me, feel free to give me a call or you may email me at alanacouch@ hotmail.com.