Starting school can be hard on kids 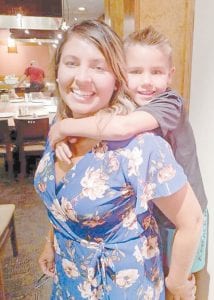 Ashley Tacket Ellis is pictured with her son, Cade Ellis.

Congratulations go to our Rose Collier! She is the newest employee at the Letcher County Senior Citizens. We are so proud and happy for her, too.

Speaking of Mommy, she hasn’t been doing much better this past week. She felt so bad Saturday night I called 911 and they took her to Whitesburg ARH. They admitted her for observation and did EKGs every six hours, blood work, and kept a heart monitor on her. They found nothing that would cause her to feel pressure around her heart. She was discharged Monday. She has another appointment Friday to find out the results from the heart monitor she wore for two weeks. Hopefully, we will find out what’s going on. 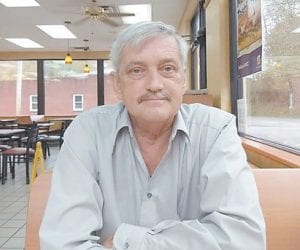 The ambulance staff, the staff in the Whitesburg ARH emergency room and on the third floor were exceptional. Doctor Bill Collins was the doctor on call this past weekend and he was also wonderful. Thank you all so much. I love how they all treated Mom as if she were their mom, especially Crystal Duty Fields. Keep Mommy in your prayers, please.

Even though Letcher County children have been in school for a month, my brother, Albert Tacket’s, grandson, Cade Ellis, started kindergarten last week. They live in North Carolina. He has been in pre-school, so nobody expected him to have problems with the transition to public school. Well, he didn’t transition so well and it is breaking his momma, Ashley Tacket Ellis’s, heart. One day last week he even had to be pulled from the vehicle by the staff.

I feel so sorry for her, because I know it is so hard. My daughter cried for two weeks. She would get on the bus just fine and she had older cousins that lived close to us, and so rode the same bus. They also would walk her to her room but by the time she got to her room she was crying. 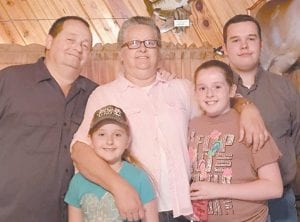 My sister, Delores Tacket Holbrook, has a son, Steven Duane Holbrook that cried every day for a long time. She asked him, “Son, why is it that nobody else is crying for their mommy anymore but you?” He said as he was crying, “They just must not love their mommy as much as I love you.” Now what can you say to that? When he finally quit crying he told them, “I’m going to go to school, but I want you know I’m just doing this to keep you and Daddy out of jail.” He took his wit after his mommy, that’s for sure.

Speaking of wit, I saw Randall Kincer at Walmart last week. He said he enjoyed reading our column because it reminded him of how he was raised. Randall said he thought they were poor when they were growing up. But, he now knows they were richer than the kids growing up today, because the lessons they learned by living the way they had to live made them so rich.

He shared stories of how cousins would come visit during the summer and how much they enjoyed spending time doing things with him that he took for granted. I would love to video him telling about their life back then. The skills they know are going to be lost forever, like being able to kill a hog and put it up for the winter.

Now that’s one skill my sister Charlene and I know and will never forget. Let me tell you what we did one time. Dad had traded something or other for a hog that hadn’t been changed yet. Well, we had no idea what that meant, but we heard them talking about it. We hadn’t had it but just for a few days. Come to find out it had been raised in a sty with plenty of room and all we had was a small wooden pen.

Well, come Saturday Mom and Dad went to town to “trade” and we were old enough to leave by ourselves. So, as we were outside playing we could hear something hitting against the side of the pen like it was going to tear the pen down. We went to check on the hog and saw that it was trying to climb up on the side of the pen and trying to get out through the trough like it was mad. We didn’t know what in the world was wrong with it. It also had big drops of water all over it and we thought it needed to be cooled down. So, we went to get a big bucket of water. We lifted it up over the side of the pen and poured it on him to cool him off.

You aren’t going to believe what happened! He dropped dead right then and there. We just looked at each other in disbelief. We tried to get him to get up but he was as dead as a coal bucket. We were so worried about what Daddy would say to us and discussed what we were going to say to him. Well, we were surprised as we could be when he didn’t get one bit mad. He just said we didn’t know any better. He just went ahead and prepared to clean it and put it up. I remember it was really hard to scrape.

We did put it up, but it was as tough as it could be and we couldn’t eat it. I think they saved it though for dog food. Mommy said it was where it hadn’t been changed. I’ve got more hog killing stories, but I’ll save them for another time.

Speaking of time, I better stop here and remind you all to be in prayer for my husband’s good friend, Rick Collins, our rec center friend, Earle Bone, and Merlene Day, all with cancer. Also be in prayer for one of Marlowe Coal Camp’s families, Kernel Banks, as he passed away this week.

Also, as Oma would tell us, remember to be in church Sunday. And I say, if your church has services throughout the week or Sunday evening, God would want you there then, too.