State agency says Neon has to raise its water rates 14% 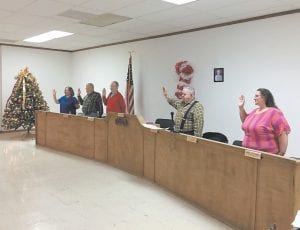 From left, Susie Fleming, James D. Collins, Jeff Breeding, Tom Haynes and Linda Cantrell are sworn in for a two-year term on the Fleming-Neon City Council by Letcher Circuit Judge Jimmy Craft, who is out of camera range. (Photo by William Farley)

The good news for residents of Fleming-Neon is that work to rebuild their city water plant could begin by March 2017 and be complete within a year. On the other hand, the Kentucky Department of Local Government has ruled that in order to repay the relatively small loan the city will have to take out compared to the overall amount of $3 million, the water rates will have to be increased by 14 percent.

At the December meeting of the Fleming-Neon City Council, Paul Nesbitt of Nesbitt Engineering, which has worked with the city to develop the planning and obtain grants and loans to finance the project, told the council that it will only have to repay $750,000 of the total $3 million for the initial phase of the project to improve the city’s water infrastructure. The entire project will eventually include replacing all the city’s water lines and tanks, but Phase I will be to rebuild the water plant. Phase I will be funded by a $1 million Community Development Block Grant (CDBG), which has been approved.

Nesbitt also told the council that even with the rate increase, the cost of purchasing water from another water district on a regular basis would still be at least one-third more than refurbishing the system. He said Fleming-Neon is part of a large group of cities, from neighboring Jenkins to Los Angeles and Atlanta, which have had to address failing infrastructure, and that replacing the entire Fleming-Neon system will take between 10 and 15 years.

Water Department Manager Chris Banks reported that the city had a 40 percent loss of treated water for November, and said that city workers had recently repaired a major break on an eight-inch line in McRoberts that had probably been losing treated water since the 1980s. Nesbitt said that costs for losing treated water will continue to rise as the costs for water treatment chemicals go up, and that chemicals are just a small part of the costs of an antiquated system.

In a related matter, Kentucky River Area Development District Community Resources Planner Angelia Smith-Hall brought requests for several ordinances that will keep the city in federal compliance and make it possible for it to receive the CDBG funding. Among these are an action plan that guarantees affirmative action in hiring, so that local people who are out of work will be given preference for jobs rather than hiring from out of the area. Others include a plan to help anyone who is displaced by the construction (plans do not call for any displacement of homes), and a re-affirmation of the city’s adherence to the Fair Housing Act. The city also re-affirmed its commitment to a drug-free workplace, passed a grievance procedure and guaranteed that the city will be able to cover cost overruns. Paul Nesbitt told the council that it is customary for project engineers to hold 10 percent of project funds in escrow to cover overruns, and that it is the project engineer’s job to make sure that budgets are kept.

The council voted unanimously to appoint several citizens to vacancies on city agency boards. Brandon Fleming of Jackhorn and Mike Adams of Fleming were appointed to the water commission, Tracy Holland of Fleming was appointed to the city ethics board, and former council member Cheryl Furby was appointed to fill the vacant seat on the city council. The council also approved a motion by Councilman Tom Haynes to amend the city budget to accept the $1 million CDBG, and to open a separate checking account for it with the title CDBG Plant Upgrade. At the end of the meeting, Letcher County Circuit Court Judge James Craft II administered the oath of office to the council.