State lawmakers to take budget for one-year only 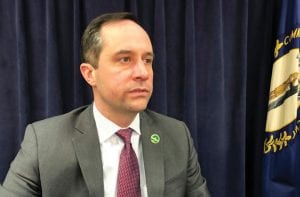 “In these times of both health and financial insecurity, we believe it to be the most prudent decision,” said Republican state Sen. Chris McDaniel, chairman of the Senate Appropriations and Revenue Committee. (AP Photo/Adam Beam)

In a rare move prompted by the coronavirus pandemic, budget negotiators will present Kentucky legislators with only a one-year state spending plan that holds the line on the main K-12 school funding formula, key lawmakers said Tuesday.

“In these times of both health and financial insecurity, we believe it to be the most prudent decision,” said McDaniel, chairman of the Senate Appropriations and Revenue Committee.

The plan revealed Tuesday doesn’t include pay raise for teachers. Democratic Gov. Andy Beshear has pushed for a $2,000 across-the-board salary boost for teachers — a key campaign pledge that helped him upset the Republican incumbent last year.

Later in the day, Beshear said that passing a one-year budget isn’t ideal but added “we’re not living in an ideal world right now” and that he’s willing to be flexible.

“If a one-year budget is what lets them come in, pass something and go home, that’s the best thing for their health and everybody else around them,” Beshear said. “We’ll work on it from there.”

Passing a one-year plan would enable lawmakers to meet their constitutional duty of passing a budget while recognizing that no revenue projection “we budget to will be anywhere close to what is correct,” said Rep. Steven Rudy, chairman of the House A&R Committee.

Lawmakers are bracing for a sharp downturn in state tax collections as many Kentucky businesses closed and others scaled back operations because of efforts to curb the virus’s spread. Layoffs have caused filings for unemployment benefits to skyrocket.

As a result, lawmakers have adjusted budget priorities reflected in the spending plan Beshear submitted in January and the budget versions that later passed the House and Senate.

The GOP-dominated legislature is set to reconvene Wednesday after a nearly weeklong break to take final action on the budget. The spending plan would then go to Beshear. Lawmakers would meet again in mid-April to take up any gubernatorial vetoes.

When lawmakers convene in early 2021, they can modify the current-year budget and “more accurately craft” a budget for the next year based on revenue trends, Rudy said.

The spending plans presented by Beshear and passed by the House were based on more optimistic forecasts for state tax collections made well before the coronavirus outbreak hit the country.

The version agreed to by House and Senate budget negotiators is built on a more pessimistic forecast projecting about $130 million less revenue in the next fiscal year, Rudy said.

As a result, the one-year plan being presented to lawmakers would maintain the current level of per-pupil funding under SEEK, the state’s main funding formula for K-12 schools, he said. The governor proposed increased SEEK funding, as did the versions passed by the House and Senate.

“Unfortunately, and as bad as this pains me to say this, it will not include any raises for anyone,” Rudy said.

Beshear said Tuesday that his budget plan added hundreds of millions of dollars for public education but reflected life before the coronavirus hit.

“Like everybody else out there who is having to make sacrifices, at least what I want out of the budget is going to have to be a sacrifice too,” the governor said during his daily coronavirus update. “Right now, this budget is going to be about maintaining … and about making sure that we can get through this crisis and come out on the other end.”

In response to the health crisis, the spending plan boosts funding for the state’s coronavirus hotline by $300,000 in the current fiscal year and by more than $800,000 next year, McDaniel said.