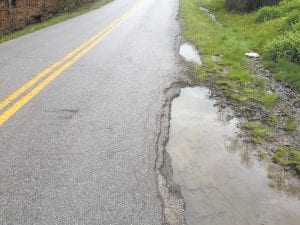 ROAD WORK UNDERWAY — State highway maintenence crews are busy this week repairing roads left damaged by harsh winter weather. Work began on U.S. 119, the county’s busiest road, on Monday. On Friday, crews are expected to make it to Thornton, where this photo of road damage was taken Tuesday. (Eagle photo)

State highway workers have started patching potholes this week on U.S. 119 between Partridge and Jenkins, which is the most heavily traveled road in Letcher County.

A maintenance crew on Monday began pouring hot mix asphalt on potholes located from mile point zero to mile point 27 on US 119. Work on Pine Mountain is expected to take three days to complete, but could take longer with rain in the forecast, said Sara George, information officer for Kentucky Transportation Cabinet, Highway District 12.

While one maintenance crew concentrates on fixing potholes, another crew is repairing pavement breaks along roadsides on KY 160 at Linefork. A crew is scheduled to repair embankment failures on KY 931 in Sandlick and Colson on Thursday and on KY 1862 in Thornton and Sergent on Friday.

Maintenance crews also are cleaning out ditchlines and culverts.

“This past winter has been particularly hard on pavement, particularly with potholes and breaks,” said George. “We know where every pothole in Letcher County is.”

George said hot asphalt mix is a more permanent fix than a cold mix. Asphalt plants opened April 1 and George said crews began patching potholes as soon as they could get asphalt.

“We have a crew out every day doing pothole patching,” said George.