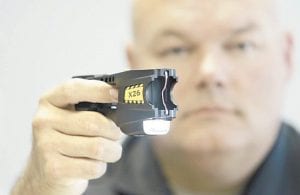 An electrical arc glowed at the end of a Taser as Kentucky State Police Capt. Jeff Mayberry squeezed the trigger of the device in Frankfort. (AP Photo/Ed Reinke)

Kentucky State Police have spent more than $170,000 on Taser devices and cartridges that troopers will be using by September.

The purchases come amid a revenue shortfall that has forced the law enforcement agency to implement cuts, including a reduction in highway patrols to save gasoline and the elimination of driver education manuals that have traditionally been provided free to Kentucky teens.

Some question the timing of the purchase, considering the state’s projected $900 million revenue shortfall during the next two years. Others applaud the move, saying it has the potential to save the lives of both troopers and criminal suspects.

State Sen. Charlie Borders, RGrayson, chairman of the Senate Appropriations Committee, said if troopers need Taser weapons, state government should provide them, even when the budget is tight.

“If that better enables them to do their jobs, and makes it less likely to have an officer injured or killed in the line of duty, I’m for it,” he said. “I just don’t want to micromanage. They’re out there doing a tremendous job. They know what they need.”

State Police Lt. Phil Crumpton said 30 troopers already were armed with Taser devices on a trial basis. The new devices will raise the number of troopers with the stun guns to 221, with plans to purchase more as funding becomes available.

“I don’t think it’s a prudent expenditure at this time in light of the current budget situation,” she said. “I’d rather go back to printing the drivers’ manuals.”

Crumpton said the information from the driver education manuals has been made available on the Kentucky State Police Web site. He said his agency will save about $100,000 a year by not publishing the manuals.

“Prioritizing spending would demand that fuel get put in troopers’ cars before Tasers get put in holsters on their belts,” said Jim Waters, a policy analyst for the government watchdog group Bluegrass Institute in Bowling Green. “What good is it to have Tasers if you don’t have fuel in your cars?”

“Tasers are an important tool for troopers to have at their discretion, and highlight my administration’s commitment to utilizing non-lethal forms of restraint whenever possible,” Beshear said in a written statement. “This weaponry helps ensure public safety while decreasing the possibility of injury to the officer, suspect and public.”

More than 300 people in the United States have died after being jolted by the Taser devices, according to Amnesty International USA. The human rights organization doesn’t definitively say that the shocks from Taser guns actually caused the deaths.

“There’s a lot of unanswered questions around Tasers,” said Dori Dinsmore, a regional director for Amnesty International in Chicago. “Not all die. Not all suffer adverse effects. But clearly some do.”

Taser International, the Arizona based manufacturer of the devices, contends none of the deaths were caused by the devices, which the company says have been used more than 600,000 times in the past 14 years. Company vice president Steve Tuttle said investigators have listed the Taser devices as contributing factors or possible contributing factors in fewer than 30 of the deaths.

Investigators listed the Taser devices as the cause of death in two cases, but Tuttle said the company disputes those findings.

“We’ve developed a safer, more effective policing tool,” Tuttle said in response to concerns from Amnesty International. “I think it’s tragic that they’re not in support of this technology.”

In a Louisville case two years ago, a medical examiner ruled that a man shot by a Taser died from excited delirium, not the shock. The same conclusion has been reached in similar cases across the country. Last month, another Louisville man died after a police Taser shock. The coroner’s office is awaiting test results to determine a cause of death.

Despite debate about the safety of the devices, 23 states have purchased them for their state police agencies. More than 11,000 city and county law enforcement agencies across the country use them.

Crumpton said Kentucky State Police purchased the Taser devices with money the agency accumulated from the sale of merchandise taken in criminal investigations.

Troopers will begin using the newly purchased devices by September after they complete required training.