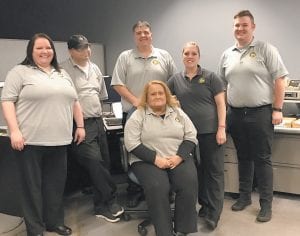 Dispatchers at Kentucky State Police Post 13 in Hazard are being recognized this week along with more than 200,000 of their fellow communicators nationwide during National Public Safety Telecommunicators Week.

These 13 “silent heroes of public safety” are more than just a voice on the other end of the line; they often save lives on a daily basis. Last year, they responded to 37,884 calls from Letcher and four other counties in the Post 13 area.

“KSP telecommunicators are challenged on a daily basis dealing with stressful situations, many that involve life and death, and they are expected to handle these situations with compassion, empathy and professionalism,” says Capt. Blake Slone, commander of KSP Post 13 in Hazard. “They must be at their BEST while dealing with people who may be at their WORST in many cases. People don’t usually call them for help when they are having their best day. By the nature of the business, they deal with people who have been victimized or need medical assistance. They may be threatening and belligerent, or in some cases, not able to communicate at all, other than dialing 911 with their last bit of strength, in an attempt to get help.

“ Telecommunicators provide a lifeline for the public as well as law enforcement and other emergency service professionals who rely on them for critical communications, information and follow up to ensure that they are and remain safe from harm,” he adds.