This 2015 Camaro was named “Best Looking Cruiser in the Country” for 2021 by the American Association of State Troopers. It will be on display Saturday at a car show at the old Whitesburg High School sponsored by Post 13 of the Kentucky State Police. Proceeds from the event will benefit Post 13’s “Shop With a Trooper” Christmas charity.

Without the public’s help, “many children throughout the post district would not get to experience the magic of Christmas”, says Kentucky State Police Trooper Matt Gayheart, public affairs officer for Post 13 in Hazard.

Trooper Gayheart and Trooper Michael Burton are the driving forces behind the First Annual “Cruising with Cruisers” Car Show, set for this Saturday (October 16) from 1 p.m. to 5 p.m. at the old Whitesburg High School. At 5:30 p.m. on Saturday, there will be a special police-escorted parade around and through the town of Whitesburg, concluding with a trip up Pine Mountain for a sunset viewing.

While the show is free of charge to spectators, a monetary donation will be required of all show vehicles entered. All makes and models of vehicles are welcome. Proceeds will benefit KSP Post 13’s “Shop With a Trooper” program that is held in Letcher, Perry, Knott, Breathitt, and Leslie counties each Christmas season.

The Kentucky State Police will have three of its special show vehicles on hand, including a 1990 Ford Mustang, a 1978 Ford Crown Vic and the 2015 Camaro that was named “Best Looking Cruiser in the Country” for 2021 by the American Association of State Troopers. 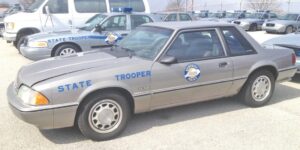 This 1990 Ford Mustang is among the Kentucky State Police show vehicles that will be on display at Saturday’s car show at the old Whitesburg High School.

In addition to the KSP show vehicles, additional police departments are being asked to participate in the event as well. There will be a special “Cruiser’s Row” of local and regional police departments to exhibit their vehicles and help to spread the message that children here in the mountains have friends in uniform. The Grainger County Sheriff ’s Department in Rutledge, Tennessee is bringing two of its brand-new cruisers from almost three hours away to support the cause.

Vehicles from four different states are expected to on display at the car show, as well as a multitude of show vehicles from Letcher County.

“We hope everyone can come out to join us, spending the day looking at some of the best cars in the area,” said Trooper Gayheart.

Persons wishing more information may contact Trooper Gayheart at 606- 671-1360 or contact the official show information line by text at 606-670-8739. The show also publishes a Facebook page with up to date information at www.facebook.com/KSPCruising.