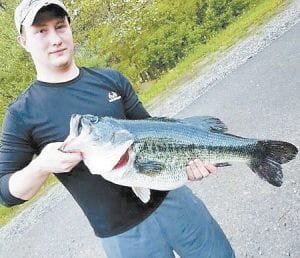 Fisherman Mark Ward of Evarts in Harlan County was hoping a 4-pound largemouth bass would pick up the Junebug-colored lizard he tossed its way. Instead, the bait was gobbled up 14-pound, 9.5-ounce brute that is the new Kentucky record.

It rained all day in Harlan County on Good Friday, but it finally cleared up just before he got off work. The water in Highsplint Lake grew a bit murky from the rain, but he saw a nice-sized 4-pound bass in the shallows.

“I pitched a lizard in there and the 4-pounder showed interest,” Ward said. “Then, another came in and looked like a big log. The 4-pound fish triggered her to pick it up. I set the hook and it was on. Good Friday turned into a great Friday for me.”

It was the first cast of the day for Ward and produced the new Kentucky record largemouth bass, a 14-pound, 9.5-ounce brute.

“When I saw it in person, what first caught my eye were the eyes on that fish were huge,” said Kevin Frey, Eastern Fisheries District coordinator for the Kentucky Department of Fish and Wildlife Resources. “It would look like a shark if you saw it swimming in the water. The thickness of the fish was really impressive.”

The new record largemouth bass was 26.8 inches long with a girth of 22.5 inches. It fell for a 6-inch Junebug-colored lizard presented on baitcasting equipment spooled with 14-pound test monofilament line.