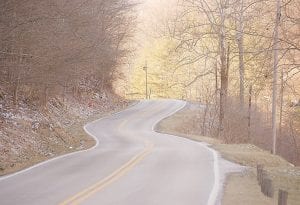 NO GUARDRAIL COMING – A project to install guardrail on this portion of KY 1148 near Isom was approved during the last months of the administration of former Kentucky Gov. Ernie Fletcher. It has since been killed by Transportation Cabinet officials in Frankfort, who say the road is not dangerous enough to warrant the expense. (Photo by Chris Anderson)

After spending several months getting petitions signed and writing letters to state officials, Shirley Breeding received word in December that guardrails would finally be placed on a dangerous stretch of Kentucky Highway 1148 between Isom and Little Colley. Mrs. Breeding has since received another letter

her the project has been canceled.

In a letter from State Highway Engineer O. Gilbert Newman, Mrs. Breeding was told the earlier decision to install guardrail along a winding one-mile portion of KY 1148 near its junction with KY 15 was in violation of a policy established by the Kentucky Transportation Cabinet in February 2006.

According to Newman, the 2006 policy was made necessary by a 2005 ruling by Kentucky Supreme Court and “was to be used to determine where best to spend limited funding for guardrail at new locations.”

Mrs. Breeding says she is having a hard time understanding how a stretch of rural road that has been the site of a number of accidents resulting in serious injury and even death does not qualify for safety improvements under the policy being cited by Newman. 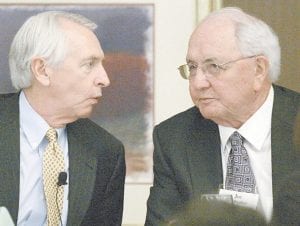 Gov. Steve Beshear, left,spoke with Transportation Secretary Joe Prather in Frankfort on Jan. 24. Beshear is defending a decision by Prather to install a stoplight near his home in Elizabethtown, even though the traffic signal is not needed for reasons of improving highway safety. (AP Photo/Ed Reinke)

“On the morning of January 17, three more vehicles were added to the list of hundreds of accidents at this spot,” Mrs. Breeding said. “There have been nine deaths there over the years.”

Newman told Mrs. Breeding that even though funding for the Isom guardrail project was approved last year, the decision was made by the Fletcher administration and did not “meet the spirit or intent of the (2006) policy” now being followed by the administration of new Gov. Steven Beshear.

“Also,” wrote Newman, “since the new administration has come into office we have reviewed the financial status of the Road Fund and have determined that there are not sufficient funds to install the guardrail selected” for funding in 2007.

“We understand this will be seen as a disappointing change of events,” Newman added, “but we intend to be prudent in both our financial and professional engineering stewardship. We will keep this location on our list of guardrail needs so when funding for new guardrail at new locations becomes available, this location can be considered.”

Newman sent a copy of his letter to Danl L. Hall, executive director of Highway District 12 in Pikeville. Hall was the official who notified Mrs. Breeding on December 5 that the project had been approved.

In a letter dated June 25, 2007, Mrs. Breeding was told by former Department of Transportation Safety Commissioner Tim Hazlette that a “roadway safety review” conducted on KY 1148 showed that guardrail was needed “beginning at or about mile point 3 and ending at or about mile point 4.” Hazlette’s letter also said guardrail installation “is generally accomplished within 45 days.”

The letter informing Mrs. Breeding of the decision to fund the guardrail project came a week after State Sen. Johnny Ray Turner wrote a letter urging the Department of Highways “to move this project along quickly.”

The letter informing her the project was canceled was mailed to Mrs. Breeding after she wrote to current Kentucky Transportation Cabinet Secretary Joe Prather to ask when the work on the project would begin.

Mrs. Breeding grew even more disappointed with the Transportation Cabinet’s decision to kill the guardrail project when she learned late last week that a non-essential traffic signal was installed recently near Secretary Prather’s home.

Beshear is defending Prather, saying he found nothing wrong with the Transportation Cabinet’s decision to install the stoplight near Prather’s home in Elizabethtown. Beshear also gave Prather a vote of confidence.

“Oh yes, Secretary Prather is going to be a great secretary of Transportation,” Beshear told reporters. “He’s knowledgeable and he’s very ethical, and I have full confidence in him.”

Beshear, a Democrat, took office last month and brought Prather on board. Prather has been involved in Democratic politics throughout his career, having served in the state House and Senate. Prather was also the Senate president pro tem and has run unsuccessfully for lieutenant governor, governor and Congress.

The Lexington Herald- Leader reported on Jan. 24 that the administration began erecting a traffic signal near Prather’s home on Dec. 12, the day after Beshear took office. The signal was installed, despite an internal review that found such a device was not essential to keep traffic flowing smoothly in the area, the newspaper reported.

Prather, however, stood by the decision and told reporters that requests for a traffic signal on Ring Road had been mounting since early 2007.

“Anyone has a right to disagree with me,” Prather said. “But I will never admit that I didn’t make that judgment for the right reasons, because I did. And that’s really the story purely and simply.”

Prather said area residents and the town’s mayor had all requested the signal get installed. The intersection, Prather noted, was the only one on that portion of road that did not have a turn signal.

It would benefit “hundreds of people” who travel the road, Prather said.

Beshear has slashed state spending by 3 percent to cope with a $434 million shortfall in the current fiscal year that ends June 30. Fiscal years 2009 and 2010 could be even worse, Beshear has said, as Kentucky faces a budget shortfall of at least $800 million during that time.

Prather said he was uncertain exactly how much the new signal cost but said it was estimated between $4,000 and $5,000. He said he did not order the signal installed.

“It just made sense to me,” Prather said. “Now, if I made a mistake in judgment, anyone has a right to disagree with me. But it was just that.”