State schools boss is forced to resign; charter schools fan has replaced him 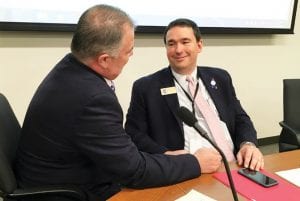 Kentucky’s top education officer was ousted Tuesday and replaced by a charter schools advocate in a move that escalated tensions between the state’s Republican leaders and teachers who have been protesting for better funding.

Officially, Education Commissioner Stephen Pruitt resigned on Tuesday. But in an impromptu conversation with reporters hours before the decision was announced, it was clear Pruitt did not wish to leave.

His exit was hastened on Monday when Republican Gov. Matt Bevin used expiring terms to replace most of the state Board of Education, which hires and fires the education commissioner. Bevin’s appointments included two of his former top aides: Hal Heiner, former secretary of the Education and Workforce Development Cabinet, and Amanda Stamper, his former communications’ director.

The new board called a special meeting for Tuesday, where they met in private for more than four hours. They emerged to announce Pruitt had resigned with a year and a half left on his contract. He was immediately replaced on an interim basis by Wayne Lewis, a senior Bevin administration official who worked for Heiner previously and was one of the architects of Kentucky’s charter school law that passed last year.

Kentucky’s largest teachers’ union condemned the move, calling it Bevin’s “latest back-door political maneuver.” Newly elected board chairman Milton Seymour said Pruitt was not forced out. But he criticized his leadership of the department, saying the state’s students have not been improving fast enough. Bevin offered similar criticism earlier in the day, saying he was concerned with a recent slide in the state’s test scores.

“What (the board) decides to do is entirely their call. My job is to put the right people on the right boards and then trust them to do the job,” Bevin said.

Pruitt left the board meeting shortly before his resignation was announced. He told reporters earlier in the day that he would “always stand for public education, wherever I am.”

But while lawmakers voted to allow charter schools, they did not vote for a permanent way to pay for them. The funding mechanism for charter schools expires June 30, and lawmakers chose not to renew it this year in the face of fierce opposition from teachers who were marching by the thousands at the state Capitol during the recently completed legislative session.

“It’s no secret I have been a proponent of high quality charter schools as a solution that should be a part of our toolbox for improving the performance of kids,” Lewis said. “There is nothing in statute that prohibits the creation of charter schools. I expect to have a rich con-