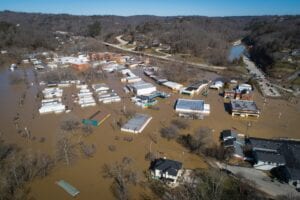 In photos above and below, the city of Beattyville, Ky., located in Lee County, sits underwater Tuesday following heavy rains which caused the Kentucky River to flood. (Alex Slitz/Lexington Herald-Leader)

Beshear said “parts of cities are underwater in eastern Kentucky” and Kentucky National Guard members are assisting local and county officials. The governor visited a hard-hit area in Calloway County in western Kentucky on Tuesday.

“These weather events have been brutal on Kentucky,” Beshear said Tuesday at an afternoon news briefing.

Floodwaters were receding in many parts of Kentucky on Tuesday, but problems remained.

State officials said the Kentucky River in Breathitt County was putting pressure on an earthen dam under Kentucky 15, forcing the county to call for about 1,000 residents in Jackson to evacuate. Beshear said the evacuations were a precaution. 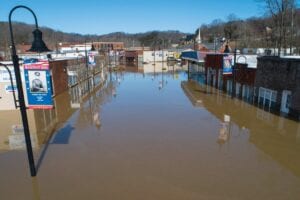 Dossett said the state has reached out to the Federal Emergency Management Agency and asked them to send an investigator to Kentucky to view the damage.