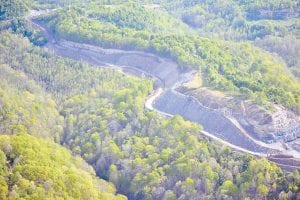 Government inspectors have been keeping a close eye on coal operators through aerial surveillance in central Appalachia, a region that’s been the center of debate over so-called mountaintop removal mining.

The Kentucky Division of Mine Reclamation and Enforcement has spent more than $477,000 over the past four years for helicopter flights over coal mining operations, according to documents obtained by The Associated Press.

A review by the AP found that the agency has been spending on average nearly $2,000 on each citation issued to mining companies for violations spotted from the air through an initiative started by the federal government’s Office of Surface Mining.

The flyovers came as a surprise to mining industry leaders, including Kentucky Coal Association President Bill Bissett, who not only complained about their “covert” nature but also questioned their effectiveness.

The agency defended the practice of flying inspectors over surface mines in a helicopter equipped with video cameras.

“We feel the helicopter’s value as an enforcement tool is a necessary component of our overall enforcement program and we would suffer greatly if we did not use it,” said spokesman Dick Brown.

News of the government flyovers was also a revelation to Haven King, a political leader in coal-rich Perry County and an outspoken critic of what he sees as regulatory overreach.

“That amazes me,” King said. “There is a war against coal in Appalachia. They’re going to shut coal mining down, and they’re doing it through policy, not law.”

Kentucky Department of Aviation documents released to the AP under the open records law show that mine inspectors, state police, even wildlife officers routinely use the state’s fleet of eight helicopters and four planes to look for errant coal operators, scout for clandestine marijuana, even watch for hunters and fishermen skirting regulations.

Flight logs show hundreds of such missions over the past four years.

News of Kentucky’s use of aerial surveillance could fuel a growing public outcry about government agencies “spying” on an unsuspecting populous.

The U.S. Environmental Protection Agency has been under fire in recent weeks for flying over Midwestern ranches looking for improper disposal of cow manure.

Like the ranchers who object to that program, coal industry representatives said they have nothing to hide. But Bissett, whose organization represents most of the state’s largest mining companies, said he was unaware of the flyovers.

Tea party activist David Adams charged that the state is wasting money on the flyovers “to spy on Kentuckians just trying to make a living. What’s next? Ticketing highway drivers by satellite?”

Jim Waters, head of the government watchdog group Bluegrass Institute for Public Policy, said he doesn’t believe the advantages of flyovers are worth the cost, especially during a time of economic recession when the state is cutting a wide array of government services.

“What does the taxpayer get out of that investment?” Waters asked. “If we cannot show how this benefits us as a commonwealth, then I think it is wasteful spending. We’ve got coal miners losing their jobs, yet we’re spending all of this money to further regulate the mining industry.”

Last year, the Division of Mine Reclamation and Enforcement wrote 1,248 citations that resulted in nearly $10 million in fines. That averages to about $8,000 in penalties per citation written, though it wasn’t clear how many of the 244 citations from flyovers resulted in fines.

Brown said the Office of Surface Mining provided the money for the Division of Mine Reclamation and Enforcement to purchase the helicopter that his agency routinely uses. But the agency reimburses the Department of Aviation for operation expenses.

“They review our program on a continual basis and seem to be happy with our use of the helicopter,” Brown said.

U.S. Sen. Rand Paul, a Kentucky Republican, has filed legislation to impose some restrictions on aircrafts used to “gather evidence or other information pertaining to criminal conduct” without a search warrant. That legislation deals specifically with unmanned drones, not conventional planes and helicopters. But Paul said the government’s use of even conventional aircrafts in flyovers is concerning for him.

“We just want a little bit of privacy,” Paul said. “You have to have that, because the alternative of having no restraint and no warrants to look at what people are doing is basically a police state.”

In Kentucky, government agencies aren’t always looking for the most heinous crimes from the air. Mark Marraccini, a spokesman for the Kentucky Department of Fish and Wildlife Resources, said his officers use aircraft to search for people poaching deer, turkeys — even frogs.

“It’s been an accepted and standard practice now for decades,” he said.

“Do we not have more important things to do? Do we not have rapists and murderers to keep off the streets, instead of looking for people gigging frogs? I mean that’s ridiculous,” he said. “But the thing is, if it’s a crime, then go to the judge and get a warrant.”

Flight logs from the department show wildlife offi cials used planes to search private land to try to find people illegally luring turkeys and waterfowl to shoot. They also use the planes to count ducks and geese. That agency spent more than $300,000 for flight time on the state aircraft over the past four years.

The American Civil Liberties Union has expressed concern about flyovers to gather information on people without their knowledge, saying the nation needs to avoid becoming a “surveillance society” in which “our every move is monitored, tracked, recorded, and scrutinized by the authorities.”

“From our standpoint, there definitely needs to be clear restrictions on the use of aerial surveillance,” said Bill Sharp, an attorney for the ACLU in Louisville.

Brown, the spokesman for the Division of Mine Reclamation and Enforcement, said the agency has been doing aerial surveillance of mine sites via helicopter since 1988. He said the flights “are a useful tool for identifying violations that may not be readily apparent on the ground.”

State police Capt. David Jude said planes are a key part of his agency’s investigations, particularly in finding marijuana crops that would be nearly impossible to spot from the ground.

The state police reimbursed the Department of Aviation $393,000 over the past four years for use of the state aircrafts. Last year alone, state police, with assistance from other law enforcement agencies, confi scated nearly $800 million worth of marijuana, most of it spotted from the air from state aircraft and Kentucky National Guard helicopters.