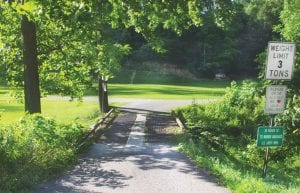 NEW BRIDGE NEEDED? The bridge at the entrance to Henry Ison Hollow on Cowan is set to be replaced by the state, but one family says the Commonwealth of Kentucky is being unreasonable in negotiations for the land.

The road that leaves Cowan and meanders up Henry Ison Hollow carried cars and trucks, horses and pedestrians all the way to Kingdom Come.

About a half mile up the hollow, the road crosses a hump and dips into Kingdom Come Creek, where cars still drive along the same gravel creek bed that horses have used for 200 years.

But the problem with Henry Ison Hollow isn’t that wet stretch of bridgeless bridle path. The problem is a bridge on the other end of the road — that bridge has sat across the road from the Scuttlehole Gap in Pine Mountain for 50 years. Bridges in Kentucky, a program of the state Department of Transportation, has decided it must be replaced, and in order to replace it, the State of Kentucky needs more than just a right of way. And what state transportation officials say they need, why they need it and how they’re going to get it, is what makes Tammy Trent mad.

Imminent domain means the state plans to take bottomland her brother owns around the existing bridge in order the build a new one. He’s offered to let the state put in a culvert, Trent said, as a temporary measure until the bridge is built, but the state has refused. Tammy Trent said the alternative is for the state to buy more than 2,000 square feet of prime gardening land next to the bridge and pave it so the state contractors will have a place to park their equipment and supplies. The price? Fourteen cents per square foot for most of it, 20 percent of that for the rest.

Tammy Trent scoffed at the offer, but said she also just plain doesn’t think the bridge needs to be replaced. According to state inspection reports, she’s right. Unlike other bridges in the immediate area, Henry Ison Hollow is marked as “not deficient,” despite a score of 15 out of 100 points for bridge stability. But construction hasn’t begun on the other bridges, including Hampton Branch (6 points), and George B. Branch (3 points), both county bridges that are in listed as “structurally deficient.”

Just 80 cars per day cross the bridge at Henry Ison Hollow, compared to 224 that cross Big Cowan Creek at Hampton Branch, and 304 at George B. Branch.

The state bridge-building program has begun buying property to rebuild bridges here, and Judge/Executive Terry Adams they’re going to build a lot in the county over the next few years. They’re county bridges, but the state will pick up the tab to fix them, and do the work. Still, he said he’s not sure the Henry Ison Hollow Bridge should be one of the ones replaced.

“It’s a good bridge in my opinion, but I’m not an engineer,” Adams said.

It makes matters worse that the bridge at Henry Ison Hollow is the second the state has tried to take from members of the Trent family. The other is about 4 miles away at Whitco.

The Transportation Cabinet filed suit in Letcher Circuit Court in February to condemn and take property belonging to Tammy Trent’s father, aunts, uncles and cousins at the entrance of Orchard Road.

Tammy Trent said the state Department of Transportation filed suit to condemn property after land agents were unable to reach an agreement with them. Letcher Circuit Judge James W. Craft II signed an order Monday appointing three commissioners to determine the value of the property around the Orchard Road bridge, which crosses the North Fork of the Kentucky River just off KY 931S.

G.C. Kincer, David Clark and Larry Adams will determine the price the state must pay for the property.