By ROGER ALFORD The Associated Press 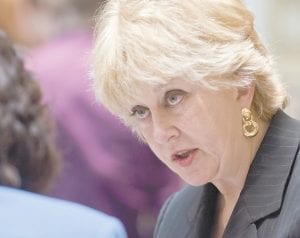 A contentious redistricting process fueled a protest in the Capitol on Tuesday that ended with a Lexington man arrested on a charge of menacing.

State Police Lt. Brian Bowling said Stephen R. Schwartz, 45, was taken into custody outside the Senate chamber. Schwartz was among a group of people who came to the Capitol on Tuesday to protest the shifting of Democratic state Sen. Kathy Stein’s Lexington district some 100 miles into northeastern Kentucky.

Schwartz was taken to jail in Frankfort. A deputy declined to release the name of Schwartz’s attorney, telling reporters to call back on Wednesday.

Senate Republican Floor Leader Robert Stivers II said protesters verbally attacked Senate President David Williams as he was leaving the chamber. Security officers ushered Williams and Stivers back into a Senate office as they quelled what Bowling described as “a disturbance.”

Stivers said Senate leaders have requested additional security as a result of the commotion that he claimed Stein had instigated. Stein denied it.

Stivers and Stein had engaged in a heated floor debate before to the disturbance. Protesters in the gallery applauded Stein and jeered Stivers in a verbal give and take over the legislative redistricting plan signed into law last week.

House Democrats and Senate Republicans haven’t yet agreed on how to redraw boundaries around the state’s six congressional districts after three weeks of intermittent talks.

With neither side budging, two lawmakers filed measures Tuesday calling for an independent commission to handle the oncea decade chore that has proven so divisive in Kentucky.

House Republicans and Senate Democrats have been unable to agree on how to redraw boundaries around the state’s six congressional districts after three weeks of intermittent talks.

Rep. Tim Moore, R-Elizabethtown, filed legislation that would create a 12-member independent commission that would recommend new district boundaries to the legislature, suggesting that could take the partisan strife out of the process.

“It’s been politicized,” Moore said. “It’s been used to gain advantage and to run roughshod not only over the members, but also over the citizens of Kentucky. Both sides are guilty of that, and we need to change the process.”

Gov. Steve Beshear suggested last week that such a change is needed, though it stands little chance of passing into law. Moore picked up a single co-sponsor for the bill, Rep. Jim Wayne, D-Louisville, who sees the process currently in place as overly partisan.

“ What we are trying to do is make this fair for everyone,” Wayne said. “We’re trying to take the hard divisive politics out of the system, and we’re trying to retain final control of the process here in this legislature.”

While both are longshot proposals, lawmakers have been giving them consideration after weeks of bitter debate on both legislative and congressional redistricting.

House Speaker Greg Stumbo said no talks have been held since Friday on the congressional maps, and that none are planned.

Redistricting occurs every 10 years to account for population changes reported in the U.S. Census. The latest count found that the state’s overall population grew from 4 million to 4.3 million from 2000 to 2010, but decreased in rural areas in eastern and western Kentucky forcing redistricting to ensure that the congressmen represents an equal number of people.

If the stalemate over congressional redistricting isn’t resolved soon, Stumbo said the federal courts could end up redrawing lines around the state’s congressional districts. The Prestonsburg Democrat didn’t seem troubled by that prospect, suggesting that the districts are so skewed toward Republicans that Democrats would benefit from almost any changes the federal courts might make.

Senate GOP leaders are pushing a proposal that leaves the congressional districts in roughly the same geographic areas, tweaked in a way that benefits Republicans.