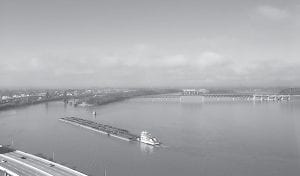 TODAY’S REALITY — In a reversal of what used to be the norm, empty coal barges (left) are seen traveling southwest near the Falls of the Ohio River (right) in Louisville earlier this winter. The empty barges were headed back toward western Kentucky and southern Illinois to pick up the lower-quality coal that many of Kentucky’s electric utilities now use instead of the higher-quality (and more expensive) coal that is mined in eastern Kentucky. (Mountain Eagle photo by Ben Gish)

Kentucky may be the nation’s third-leading coal producer, but over the years it has increasingly turned to other states to supply coal for its power plants.

Kentucky power plants use only a fraction of the coal they once did from the state’s struggling eastern coalfield, and according to federal data compiled by the state Energy and Environment Cabinet, coal mined in other states has almost entirely displaced it.

Kentucky relies on coal for more than 90 percent of its electric power needs, and is burning more than it did in 1983. Though more than half the state’s mining jobs have disappeared since 2009, the amount of coal the state consumes has barely budged.

The data show that over the long term, the percentage of eastern Kentucky coal that fires the state’s power plants has plunged from 32 percent in 1983 to 4 percent in 2015. Meanwhile, coal produced in western Kentucky still supplied an estimated 57 percent of what the state consumed last year.

The balance of Kentucky’s coal needs last year, about 39 percent, was met by other states, including Ohio, Indiana, Illinois, Colorado and Wyoming.

Kentucky is among two dozen states suing the U.S. Environmental Protection Agency to block its Clean Power Plan, which would require a one-third reduction in carbon dioxide emissions by 2030. Much of that could be achieved by closing coal-fired plants and converting to natural gas or renewable energy sources.

While it’s still unclear what impact new federal rules might have on Kentucky power plants, economic factors have trumped loyalty to the product as coal from other states has replaced what came from Kentucky’s own backyard.

“Most of what’s going on is being driven by basic economics,” said Kenneth Troske, Sturgill Professor of Economics at the University of Kentucky. “Is government regulation a factor? It’s not the primary factor that’s driving it.”

Coal in the state’s mountainous eastern region is lower in sulfur dioxide, but it is more expensive to mine and transport. Much of the remaining coal in eastern Kentucky has to be trucked to rail or barge loading facilities, adding to the cost.

Power plants that have installed scrubbers to remove sulfur dioxide can burn less expensive higher-sulfur coal mined in western Kentucky or other states.

Even though that coal has to be transported farther to plants by rail or barge, it’s still less expensive than the coal that’s mined in eastern Kentucky.

Troske said eastern Kentucky coal was becoming harder to mine and more expensive to extract.

“It’s a world market,” he said. “They’re just losing in that competition.”

Even in-state utilities that used to be faithful customers have adjusted.

The East Kentucky Power Cooperative, the state’s secondlargest electric utility, once got the bulk of its coal from eastern Kentucky. About a decade ago, however, it began to shift to other states. In 2014, the utility received 66 percent of its coal supply from states other than Kentucky, primarily Ohio, Indiana and Illinois.

Only 11 percent of the utility’s coal came from eastern Kentucky.

East Kentucky’s H.L. Spurlock Power Station, near Maysville, was once a steady customer of eastern Kentucky coal. After installing scrubbers, however, the plant began importing higher-sulfur coal from Ohio, Indiana and Illinois. In 2014, 66 percent of its coal came from other states. None came from eastern Kentucky.

Nick Comer, a spokesman for the East Kentucky Power Cooperative, said the utility had switched to the cheaper coal to partially offset the $350 million cost of installing scrubbers at its Spurlock plant.

“As a result of incurring the large capital expenses to add this equipment,” Comer said, “those units are now capable of burning coal with higher sulfur content while meeting the stricter federal emissions standards.”

In another dramatic shift, Kentucky Utilities’ E.W. Brown Generating Station, near Burgin, burned eastern Kentucky coal almost exclusively from the mid-1990s to 2011. Then, after installing scrubbers, it switched to coal from southern Indiana. In 2014, 68 percent of its supply came from Indiana, while 17 percent came from eastern Kentucky.

Natasha Collins, a spokeswoman for Kentucky Utilities, the state’s largest utility, said the company sourced coal from southern Indiana because it could be purchased and transported to the plant at the most reasonable cost. She said the installation of scrubbers at the Brown plant had “enabled greater options for consideration when purchasing coal supply.”

“We continually monitor the price of available fuel to determine the best option for meeting our customers’ energy demand at the lowest reasonable cost,” she said.

Bill Bissett, president of the Kentucky Coal Association, said utilities had to be competitive in the sources they used.

“We like the idea of Kentucky coal being used to create Kentucky electricity,” he said. “We also understand that the utilities have to do what’s best for them based on cost and available resources.”

Kentucky’s elected officials, Democrats and Republicans alike, have been quick to blame the policies of President Barack Obama for the decline in the production and use of coal, rather than competition from cheaper natural gas, cheaper coal from other states and the impact of regulations that preceded his presidency.

For many years, the Clean Air Act helped eastern Kentucky coal, because one way existing power plants could easily meet federal limits on sulfur dioxide emissions was to burn lower-sulfur coal, the kind the region has in abundance.

But when those same plants had to meet new air-quality standards, they either installed pollution controls in order to use cheaper coal or switched to cleaner-burning natural gas. Both choices didn’t favor coal from eastern Kentucky.

The Kentucky Public Service Commission approved the installation of scrubbers on the Brown and Spurlock plants in 2005 and 2006, when George W. Bush was president.

To be sure, the EPA plan to reduce carbon dioxide emissions might accelerate the process, and that’s generated considerable anxiety in Kentucky and other coal-dependent states. The issue contributed to the defeat of Kentucky Democrats running for governor and the U.S. Senate in 2014 and 2015.

But even states that are suing the EPA alongside Kentucky are making plans to comply with the Clean Power Plan in case they have to. Wyoming, the nation’s No. 1 coal producer, is drafting a compliance plan, as is West Virginia, which ranks No. 2.

Illinois, the No. 4 coal-producing state, is not just planning to comply, but also has taken the opposite position to Kentucky’s, defending the EPA in court.

Among Kentucky’s neighbors, only Indiana is sharing in its complete defiance of the plan. If they lose in court, both states risk having the EPA impose its own plan on them.

Peter Hille, president of the Mountain Association for Community Economic Development in Berea, Ky., said the collapse of eastern Kentucky coal was “a disaster” for the region, but that people were realizing that planning for the future meant more than blaming one federal agency or one president.

“It’s a wake-up call, which in many ways is what the region needs,” he said.