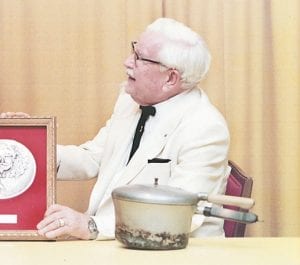 Col. Harland Sanders, founder of Kentucky Fried Chicken, is seen in this 1975 Richmond Register photo. A bronze statue of Sanders will be erected later this year.

A bronze statue of Sanders is scheduled to be unveiled in Corbin on Aug. 5.

The Colonel’s statue will be the centerpiece for Sanders Park, which opened last year on Main Street. Corbin is also home to the Harland Sanders Cafe and Museum, where customers can still order the colonel’s famous chicken.

Work on the statue is being done by Louisville sculptor Raymond Gras.

The project has been in the works since discussions began in 2009. (AP)