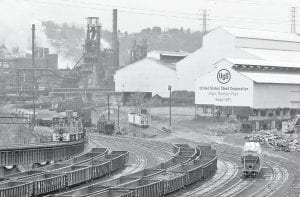 The steel industry had been riding high earlier this year, as surging demand from China and other countries, coupled with soaring prices for materials used in steel making, produced the most lucrative market for the metal in more than 60 years.

Lower revenues and more layoffs loom in the months ahead, and production may not return to levels seen earlier in 2008 for more than two years, according to some analysts.

“The downturn has been dramatic, both in the speed and the magnitude,” said Christopher Plummer, managing director of Metal Strategies Inc., a consulting firm in West Chester, Pa. “It’s quite concerning and alarming.”

John Anton, a steel economist with IHS Global Insight, said he expects U.S. steel production to fall next year, and that steel companies will be lucky to make about 65 percent as much as they did in 2008. Revenues could fall 35 to 40 percent, and pre-slow- down production levels may not return until 2011.

Layoffs and production cuts are inevitable, but “as long as (steel companies) saved some of the huge profits they made in 2008 … they should survive,” he said.

The U.S. steel industry has been particularly hard hit by a decline in the number of new houses being built after multiple years of excessive construction, Anton said. While little steel is used in new residences, they bring shopping centers, hospitals and schools — buildings made from larger amounts of the metal.

Booming demand from China, particularly construction, helped revive the steel industry after a severe downturn from 1998 through 2002 caused by the Asian economic meltdown and other financial crises, as well as a strong dollar that made U.S.- produced steel more expensive on the world market.

Then demand suddenly began drying up in August. China’s expansion waned partly due to a drop in demand for Chinese goods, while North American and European construction tailed off. U.S. auto makers reported plummeting sales and continued shifting toward smaller cars that require less steel. The dollar strengthened, dampening exports, and steel distributors liquidated their inventories.

“Best I can tell, the buyers went on strike in August and they haven’t come back yet,” said Bradford.

The drop in demand has pulled down prices. Scrap steel, used by steel mills, recently slid to about $90 per gross ton after trading around $550 in July. The metal, from junked cars and other refuse, is considered a market indicator.

Meanwhile, hot-rolled sheet steel, used in autos, office furniture and appliances and considered the industry’s benchmark product, dropped to about $785 per ton a few weeks ago from $1,080 in July. It had reached that lofty level after surging from $570 at the end of 2007.

Lower scrap prices have helped companies such as Nucor Corp., which turns the used metal into steel in electric arc furnaces. But even the Charlotte, N.C.- based company — which relies on so-called minimills that can be shut down and restarted quickly to adjust for demand — has declined to forecast its future financial performance.

AK Steel Holding Corp. earlier this month said it was temporarily closing plants in Ohio and Kentucky because of sharply lower demand, laying off as many as 1,190 workers, though a small number will stay to maintain the facilities. Earlier, the West Chester, Ohio, company lowered its projected fourthquarter steel shipments by about 14 percent.

Also this month, Pittsburghbased United States Steel Corp., which posted record profits for the three months ended in September, said it was laying off 675 workers in the U.S. and Canada due to weaker demand amid the economic downturn.

The company said earlier it had reduced production to match declining order rates and warned of weaker results for the rest of the year due to weakening demand in North America and Europe. It also postponed plans for a $450 million plant in Alabama.

ArcelorMittal SA, the world’s largest steel producer and operator of 21 plants in the United States, plans to cut output by nearly a third and has predicted tougher times ahead. It cited a need to rebalance supply and demand and put on hold an expansion plan that would have boosted steel shipments by a fifth by 2010.

In a very short period, steel went from its worst market since World War II, from 1998 to 2002, to its strongest, said Plummer, of Metal Strategies. “And now you can see we’re in a significant free-fall.”

U.S. steel mills are now probably operating at less than half their capacity, down from full capacity in August, said industry analyst Michelle Applebaum. That would be their lowest point since the early 1980s.

John Tumazos, another industry analyst, said he estimates the weekly operating rate for U.S. steel mills will not bottom out until the December holidays. “Some of the workers being furloughed may not get back soon,” he said.

The domestic industry has changed drastically since the 1970s and 1980s, when it collapsed partly due to competition from imported steel and broader economic problems. U.S. mills have become consolidated among relatively few international players.

Annual global steel production last declined in 2001, said Anton, of IHS Global Insight, citing figures from the American Iron and Steel Institute. The U.S. industry has been more erratic, with a 7 percent gain in 2006 and a 1.5 percent decline last year, he said.

China, the world’s biggest steel making country, has responded to sinking demand this year by cutting output by 20 percent. Over the past 12 years, China’s steel industry — once comparable to the U.S. industry’s output of about 100 million metric tons per year — has added mills that together produce more than four times the amount of steel made in the United States.