By DYLAN LOVAN The Associated Press 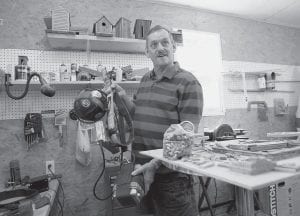 Former coal company owner and mine engineer Jerry Howard holds tools of his former trade as he stands in his woodshop in Garrett in Floyd County. Coal is deeply linked to the culture and economy in central Appalachia but the industry is facing an expected collapse in production over the next few years. (AP Photo/Ed Reinke)

When business screeched to a halt at Jerry Howard’s eastern Kentucky mine engineering company two years ago, he decided to call it quits after four decades in the coal industry.

“We were sort of forced out,” Howard says of the former company, Walturn, where he was part owner.

Business owners like Howard, politicians and miners in the hilly coalfields of Central Appalachia blame the industry decline on tougher regulation from the Obama administration. They aren’t as ready to talk about something a change in administrations cannot fix. The region’s thick, easy-to-reach seams of coal are running out, forcing many operators to shift to cheaper and more destructive mining methods that draw heavier environmental regulation.

Coal here is getting harder and costlier to dig — and the region, which includes southern West Virginia, Virginia and Tennessee, is headed for a huge collapse in coal production.

The U.S. Department of Energy projects that in a little more than three years, the amount of coal mined here will be just half of what it was in 2008. That’s a significant loss of a signature Appalachian industry, and the jobs that come with it.

“The seams of coal that are left in this area are harder and harder to mine, and they’re thinner and thinner and thinner,” said Leonard Fleming, a retired miner and union leader in Letcher County who worked in the industry for 32 years.

The thinner seams make it less cost-effective for a coal operator to send an army of miners underground, so surface mining with blasting and earth movers has often been the answer.

“I’ve heard of them getting little seams of coal as small as six inches,” Fleming said.

Coal company reports to investors are also candid about the region’s steadily declining supply of coal.

The federal government’s projections are dire for a region practically synonymous with coal. The Energy Department’s statistical agency, the Energy Information Administration, says production is expected to drop to 112 million tons by 2015, less than half of the 234 million tons mined three years ago.

A collapse of that magnitude would have a devastating effect on the economies in eastern Kentucky and southern West Virginia, which produce about 90 percent of Central Appalachian coal.

There were about 37,000 coal industry employees in Central Appalachia in 2008, accounting for anywhere from 1 to 40 percent of the labor force in individual counties, according to a report by Downstream Strategies, a consulting firm in Morgantown, W.Va., which issued a report on the region’s coming decline. The report blames the decline on the region’s depleted reserves, environmental regulations as well as competition from regions that have lower operating costs, like the western U.S.

“We are going to see declines in labor and jobs, and it’s going to happen rapidly” in West Virginia, said Rory McIlmoil, who helped draft the report. McIlmoil said that state is expected to see a decline of over $100 million in the taxes coal operators pay to mine in the state.

If the loss projections are true, “that’s going to have a drastic effect” in eastern Kentucky, said Brad Hall, president of the Southeast Kentucky Chamber of Commerce in Pikeville.

“ There’s approximately 18,000 to 20,000 miners in Kentucky right now,” Hall said. “If those production levels go down … you can see what effect that would have.”

Industry supporters and political leaders from the coalfields have taken aim at the Environmental Protection Agency under Obama, saying its tough stance on a controversial surface mining method known as mountaintop removal is stifling production and eliminating jobs.

In 2009, the year President Obama took office, coal produc- tion in eastern Kentucky fell by nearly 19 percent from the year before, from 90 million tons to 73 million.

“I am as afraid of my government as I have ever been,” said Rusty Justice, who owns a Pikeville engineering and construction business that works with coal operators. “The policies being enacted by my government is going to destroy the economy of my part of the state.”

Robert Ukeiley, an environmental lawyer in Berea, Ky., said industry and political leaders ignore the fact that seams in the region are getting harder to reach.

“They’ll blame it on Obama and climate change, rather than just acknowledge that geology trumps economics,” he said.

In one of the biggest blows to the industry, the EPA earlier this year revoked a water permit for Arch Coal’s Spruce No. 1 mine in Logan County, which was to be West Virginia’s largest surface mine that uses mountaintop removal. Plans for the Spruce mine included the burial of more than six miles of streams with material blasted and scraped from the mountain tops.

The West Virginia Coal Association, an industry group, said the rare act of revoking the permit “casts a dark shadow over all federal regulatory permit actions related to the coal industry in West Virginia and elsewhere.” The group said the action eliminated hundreds of potential jobs.

A top eastern Kentucky coal producer, Tampa, Fla.-based TECO Energy, said in its 2010 annual report that compliance with EPA standards are “projected to be very costly” and could make its “reserves no longer economic to develop.”

Several coal operators and company executives, including officials from St. Louis-based Arch and TECO, were asked to comment for this story, but they declined to be interviewed by the AP.

Experts say a sign of the region’s declining reserve base of coal is the steady drop in production despite the increase in hiring over the last decade. They say it’s taking more labor to mine the same or less amount of coal.

Even with more workers, production dropped in Central Appalachia’s underground and surface mines to 196 million tons in 2009 from 261 million in 2000 — a 25 percent decline.

“Now that tells you something, because it’s not been declining in other parts of the country in that way. It tells you something about the economics of coal mining here,” said Jason Bailey, a researcher at the Mountain Association for Community and Economic Development in Berea.

The Energy Information Administration said in a 2011 outlook statement that the region’s coal is “extensively mined” and its higher-cost coal will slowly be “supplanted by lower cost coal from other supply regions.”

Wyoming’s Powder River Basin, produced about 417 million tons in 2009, more than twice the output of Central Appalachia that year.

Justice said when he was just getting into the business, an old veteran of the mines gave him some words to live by.

“He said, ‘The number one rule in mining is you mine the best and then what’s left is the best,’” Justice said. “They’ve been mining coal here in the valley for about 100 years. And the first day the first guy mined the best lump of coal he could find — that was the easiest to get.”