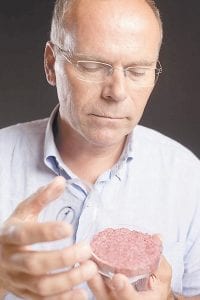 A new Cultured Beef Burger made from cultured beef grown in a laboratory from stem cells of cattle, is held by the man who developed the burger, Professor Mark Post of Netherland’s Maastricht University. (AP)

The food of the future could do with a pinch of seasoning — and maybe some cheese.

Two volunteers who took the first public bites of hamburger grown in a laboratory gave it good marks for texture but agreed there was something missing.

“I miss the salt and pepper,” said Austrian nutritionist Hanni Ruetzler. U.S. journalist Josh Schonwald confessed to a difficulty in judging a burger “without ketchup or onions or jalapenos or bacon.” Both tasters shunned the bun, lettuce and sliced tomatoes offered to them to concentrate on the flavor of the meat itself.

Mark Post, the Dutch scientist who led the team that grew the meat from cattle stem cells, regretted having served the patty without his favorite topping: aged gouda cheese.

“That would have enhanced the whole experience tremendously,” he told The Associated Press. He said he was pleased with the reviews: “It’s not perfect, but it’s a good start.”

Post, whose team at Maastricht University in the Netherlands developed the burger over five years, hopes that making meat in labs could eventually help feed the world and fight climate change — although that goal is probably a decade or two away, at best.

“The first (lab-made) meat products are going to be very exclusive,” said Isha Datar, director of New Harvest, an international nonprofit that promotes meat alternatives. “These burgers won’t be in Happy Meals before someone rich and famous is eating them.”

“We’re trying to create the first cultured beef hamburger,” he said in a videotaped message. “From there, I’m optimistic we can really scale up by leaps and bounds.”

Scientists agreed that improving the flavor probably won’t be hard.

“Taste is the least (important) problem since this could be controlled by letting some of the stem cells develop into fat cells,” said Stig Omholt, director of biotechnology at the Norwegian University of Life Sciences.

Adding fat to the burgers this way would probably be healthier than getting it from naturally chunky cows, said Omholt, who was not involved in the project. He called Monday’s tasting a publicity stunt — but not in a bad way. He said it was a smart way to draw public attention, and possibly investor funds, to efforts to develop lab-grown meat.

Post’s team made the meat from shoulder muscle cells of two organically raised cows. The cells were put into a nutrient solution to help them develop into muscle tissue, and they grew into small strands of meat.

It took nearly 20,000 strands to make a single 140-gram (5-ounce) patty, which for this week’s event was seasoned with salt, egg powder and breadcrumbs. Red beet juice and saffron were added to help the burger look more meatlike; Post said the lab-made patty had a yellowish tinge.

“I’m a vegetarian, but I would be first in line to try this,” said Jonathan Garlick, a stem cell researcher at Tufts University School of Dental Medicine in Boston. He has used similar techniques to make human skin but wasn’t involved in the burger research.

Experts say new ways of producing meat are needed to satisfy growing carnivorous appetites without exhausting resources. By 2050, the Food and Agriculture Organization predicts global meat consumption will double as more people in developing countries can afford it. Raising animals destined for the dinner table takes up about 70 percent of all agricultural land.

If the product is ever ready for market, national food authorities will likely require data proving the lab meat is safe; there is no precedent. Some experts said officials might regulate the process used to make such meat, similar to how they monitor beer and wine production.

Only one patty was cooked, and the testers each took less than half of it. Post took the leftovers home so his kids could have a taste.