Steve Stamper will be greatly missed 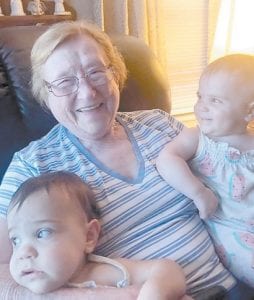 Hello again everyone! I really don’t know how or where to start writing this column. I decided to take another trip to the mountains as before long the cold months of winter are going to be hitting me right smack in the face and I will be housebound once again.

You might have heard the old saying as I’ve heard for many years, “You better make the hay while the sun shines.”

Thursday I arrived and checked into the Parkway Inn. The young attendant was nice enough to offer to carry my luggage up the steps for me. At the moment all I wanted was go to the room, turn the air on and rest for a bit.

I did rest for a bit then decided to go to McDonald’s for a cold sweet tea, with every intention of going by Whitesburg Hospital to pop in to see if Steve Stamper was still a patient there.

I got distracted and passed the entrance to the hospital, so I decided I would wait and go back Friday as the sun seemed to be making the car exceptionally hot. When I drove through Whitesburg, the heat became unbearable, and I felt like I couldn’t get my breath. I was very uncomfortable.

I turned the knob high on my air conditioner, which to my surprise was blowing hot air.

The temperature on the outside driving through Whitesburg read 102 degrees on my little digital dial on my car. I just thought that was why I was getting hot air. Well I soon discovered my air conditioner had gone out completely.

I went back to the motel and I was totally exhausted and very disgusted. I never left the confinements of the motel room for the rest of the evening.

Later I had the motel attendant bring my luggage in for me, then in the evening I did call Sue to tell her that I was at the motel.

I was so restless Thursday night and Friday I was very sick and slept most of the day. I hung the Do Not Disturb sign on the door, and never left the motel room until late Friday afternoon. No one knew I was coming and actually no one from this end except my son knew I was going to the mountains.

I had taken peanut butter, bread, and orange juice in case my sugar dropped, plus I had Boost so I knew I had something that I wouldn’t starve.

Friday I did go to Campbell’s Branch to listen to Sunrise Ridge as I heard that they wouldn’t be at Carcassonne square dance, as they were playing at Dock Boggs festival in Norton, Va. I got feeling very sick so I left Campbell’s Branch early.

Bertha Turner was there and I completely forgot to hug Bertha and tell her good-bye as I was leaving. Bertha is in a wheelchair after her accident several months ago, but she really looks wonderful considering all she has gone through.

Saturday I spent most of the day again in the motel. I kept thinking of Steve Stamper, and I was planning on going to Blackey Library to pick up a Blackey Day t-shirt. I wasn’t able to do either.

Sue picked me up to take me to Carcassonne square dance. Fred Campbell’s band played. I think their band is called Bluegrass Friends. I will say one thing, if the bass player’s floating feet of Bordus Adkins had stepped off the stage to dance I really don’t know if I would have been able to sit still or not. I might have tried to hold to the stage and lift my right foot a few steps.

When Ballard Adkins started to play that fiddle and Fred with playing claw hammer, the longing to dance was just about too much for me to sit still.

As much as I love Sunrise Ridge, this group did an exceptionally great job for the square dance.

Some guy asked me to dance, but I explained that my wrist was healing from being broken. Before I could explain he said he would kiss my wrist and make it feel better. I wanted to ask if he kissed my ankle would he guarantee it would help my ankle, however I kept my mouth shut.

By the time the dance was over I was feeling a little worn out, and it was another restless night.

Sunday morning was a very foggy morning. I sat on the balcony talking to Sue on the phone watching the fog slowly fade. The traffic is so loud and furious traveling on 15 and it is dangerous to try to get in and out at Parkway Inn Motel. The state needs to put a traffic light before someone is killed.

For some reason, I couldn’t shake Steve Stamper from my nimble brain, so I decided I would take a trip to Whitesburg and run by the Golden Apple to see if they were open, since there had been a fire in one of the buildings Friday night.

I remembered Whitesburg Hospital’s number even though it has been years since I have called it. I asked if Steve Stamper was still a patient there, I was told he wasn’t a patient, so I assumed he was at Letcher Manor.

There’s never anyone at the desk on Sundays so a nurse was in walking in the hallway and I asked if she could tell me what room Steve was in. I was completely floored, flabbergasted, shocked, and what ever else you can think of when she told me Steve Stamper had died a long time ago.

I knew Steve was all right Thursday morning as he had shared something on Facebook. I kept insisting no way had Steve passed a way a long time ago.

I didn’t have Phyllis Caudill’s phone number with me, as I was going to see if Steve had gotten to come back to her house. All the way home it kept playing in my thoughts.

When I pulled in front of my house, I didn’t take time to unload anything, I came straight in to find Phyllis Caudill’s number. Phyllis sounded so weak when she answered I asked if I had awakened her. Phyllis replied no she was getting ready to go.

I can’t even tell you what I said, then she told me Steve had a massive heart attack Friday. I know we said a few words, but I couldn’t tell you what we talked about.

This is one time I waited a little too late as I have wanted to meet Steve and his wife for years.

For his daughters and grandchildren and sister Phyllis Caudill, may you every one take comfort for having this special man in your life.

This is one time I waited a day too late to do what should have done, as I am very guilty of putting things off.

It was great to see Mike and Marcia Caudill again. Marcia got to dance a few times as she had plenty of help in the kitchen.

Mike and Marcia have an old-fashioned Golden Delicious apple tree that hasn’t produced in a few years, but this time she saved me a few apples so the deer and raccoons didn’t get all of them.

Marcia also sent me home with something I could not find any place — a mess of half runner green beans. The real half runners, since places are selling green beans that are advertised as half runners are not.

Not only that, but if God lets me live until Thanksgiving I will be having shucky beans for Thanksgiving dinner. I will rephrase that. I will be cooking shucky beans, and my son Keith Ballard and I will share a little bowl with Johnny and Ann Calihan. Yes I will eat a bite even though I know how bad it will hurt me.

Thank you, Marcia, so much for being such a caring person.

This Saturday is Letcher County Picnic. I wish I had changed the date this year as so many will not be there due to illness.

I am bringing this to a close as my heart isn’t in writing. Until next time, Rose Ballard, 9110 Lawrenceburg Rd., Harrison, Ohio 45030.