By DAN GELSTON The Associated Press 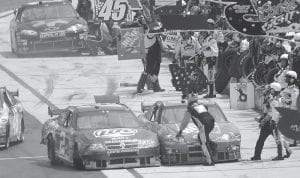 NASCAR driver Kurt Busch (2), left, made contact with NASCAR driver Tony Stewart, right, as Stewart was stopped at his pit stop during the Autism Speaks 400 auto race at the Dover International Speedway in Dover, Del., on Monday. (AP Photo/Carolyn Kaster)

Tony Stewart and Kurt Busch went from running inside the top 10 to running into walls. And Stewart wasn’t shy about blaming Busch for the wreck that cost them both a shot at catching winner Martin Truex Jr.

“There are only a couple bad apples out there, and he’s one of them,” Stewart said.

Stewart and Busch were both running in the top 10 in Monday’s race at Dover International Speedway when Busch clipped Stewart as he went to make a pass in Lap 271. Busch nosed into the wall and Stewart was sent hard into the SAFER barrier on the outside retaining wall.

Both saw their chances at a victory evaporate.

Stewart also was angry one his crewman was nearly hit by Busch on pit road. While Stewart’s team checked out the damage to the No. 20 Chevrolet in the pit stall, Busch pulled next to Stewart’s car, forcing jackman Jason Lee to jump back and onto the hood.

NASCAR parked Busch and he finished 42nd. Stewart returned from an extended stay in the garage to finish 40th.

“When you’ve got guys that you let them go every time they get to you, and they don’t do the same thing when the roles are reversed, you finally get tired of it,” Stewart said. “You finally learn to race those guys the way they race you. It’s Busch and a few others who do that.”

Stewart said Busch had the unfortunate habit of racing Stewart on every lap “like it pays a million dollars.”

Stewart didn’t pay too much in the points standings and is seventh, 486 points behind leader Jeff Gordon.

Stewart tonight (Wednesday) is promoting a half-mile dirt track race at Eldora Speedway, which he owns. The drivers will run the 30-lap race in dirt latemodel stock cars. Busch had previously been unable to accept an invitation because of a scheduling conflict.

If they want to settle their differences, the drivers will have to do it in the garage. Stewart said there will be no payback this weekend at Pocono Raceway once the green flag drops.

“I’ve never tried to wreck him, and I’ve had plenty of chances to try to wreck the guy. That’s not what it was about,” he said. “It’s about racing people with respect, and he hasn’t done that with anybody for a year.”

TIRED OUT: Dale Earnhardt Jr. would have loved a win to talk about for at least a few days instead of only where NASCAR’s hottest free agent will end up next season.

Unfortunately for Earnhardt, it’s back to the rumour mill. At least Dale Earnhardt Inc., teammate Martin Truex Jr. raced away with his first career win.

Earnhardt’s second-place qualifying effort for Monday’s race at Dover International Speedway was wasted only 110 laps into the race. His No. 8 Chevrolet got a flat tire down the back straightaway. Earnhardt got caught in lapped traffic and couldn’t immediately get to pit road.

His car limped into the pit stall and fell two laps down, all the way to 41st.

Earnhardt’s tire got him again a little past halfway in the 400- mile race. He had to make his second unscheduled pit stop because of a soft rear tire, dropped four laps back at one point and finished 22nd.

CAR OF TOMORROW: For the first time in six tries, a driver other than one from Hendrick Motorsports won a Car of Tomorrow race. Martin Truex Jr. had the biggest margin of victory for a COT winner yet: 7.355 seconds over Ryan Newman.

While there had been some complaints about the car, many of the drivers on Monday felt it handled just fine on the mile concrete oval.

“I actually had fun out there for the first time in a COT,” said Mark Martin.

Not everyone was as enthusiastic. Matt Kenseth, who finished fifth, complained the car was worse than ever.

“It was just so tight all the time, you could never make it turn,” he said. “If you’ve got the steering wheel cranked to the left and it won’t turn, there’s not a lot you can do as a driver to help out.”