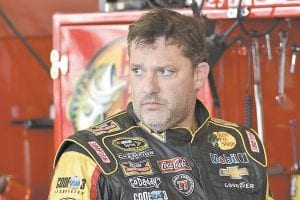 Tony Stewart stood in the garage area last Friday after a practice session for Sunday’s NASCAR Sprint Cup Series auto race at Watkins Glen International, in Watkins Glen N.Y. Stewart struck and killed Kevin Ward Jr., 20, a Sprint car driver who had climbed from his car and was on the track trying to confront Stewart during a race at Canandaigua Motorsports Park in upstate New York on Saturday night. (AP Photo)

When he triggered a 15-car accident a month later at an upstate New York race track that left a young girl with a fractured back, he took the blame and moved on to the next event. And when Stewart flipped his sprint car five times at a race in Canada, he bristled at the suggestion he was taking unnecessary risks in his lucrative career.

Stewart didn’t once waver in his stance, even after breaking his right leg racing his Sprint car last August. The injury sidelined him for six months, put his Stewart- Haas Racing organization under considerable strain and again drew criticism over his extracurricular activities.

He remained undeterred, almost defiant. Racing sprint cars is Stewart’s passion. It’s his hunting and his fishing and his video games all rolled into one.

But now his hobby, racing on tiny little tracks in nondescript towns outside of a busy NASCAR schedule, is again being called into question. The three-time NASCAR champion struck and killed a 20-year-old racer who had climbed from his car Saturday night to confront Stewart on a New York dirt track following a crash caused by contact between the two cars.

Kevin Ward Jr. and Stewart were racing side-by-side for position early at Canandaigua Motorsports Park when Stewart, on the bottom, seemed to slide toward Ward’s car and crowd him toward the wall. The rear tire of Stewart’s car appeared to clip the front tire of Ward’s car, and Ward spun into the fence.

Ward, wearing a black firesuit and black helmet, climbed from the car and walked onto the track pointing in Stewart’s direction. One car had to swerve to avoid hitting him before Stewart got to Ward. Although the front of Stewart’s car passed Ward, it appeared the young driver was struck by the right rear tire and hurtled through the air.

Hours later, Stewart pulled out of the race at Watkins Glen. A second year the race would go on without him.

“There aren’t words to describe the sadness I feel about the accident that took the life of Kevin Ward Jr.,” Stewart said in a statement.

There’s no doubt that Stewart, so gruff and easily irritable on the outside but so charitable and compassionate on the inside, is heartbroken. He can be a bull in a china shop on the track, and he’ll never escape his quick-tempered, retaliatory reputation.

But Stewart would never intentionally try to hit another human being with his race car. He may lose his temper and shove a driver or throw a helmet or spin a rival on the track, but Stewart doesn’t run over aspiring young shoes.

Stewart spent most of last August bedridden, needed two surgeries to stabilize his leg, was forced to use an ambulance to get to his doctor appointments and, when he could finally get out of bed for a little bit each day, he was confined to a wheelchair. But the whole time he plotted how his ac- accident — he was injured when the torque tube broke and pierced his leg — could improve the safety of Sprint car racing.

He made good on his vow, too. When he finally returned to Sprint car racing last month, the car he drove had a clamp holding down the torque tube and four different tethers stabilizing it inside the car.

Stewart was devastated at the hit Sprint car racing took last summer, when Leffler and two other drivers were killed, followed by his high-profile accidents. There’s no chance he would have willingly opened grassroots racing up to another round of scorn.

“He’s been great when he’s with us. We’ve been proud to have him in our field, he’s raced hard, he’s raced clean, he respects what we have to offer,” said Chuck Miller, race director Saturday night in New York.

Why, though? Why does Stewart go back to race for $1,500 here, $3,000 there, against a field of drivers of varying ages and talent levels?

Because it’s where he came from and it’s what he loves. Being a NASCAR superstar pays Stewart’s bills. It’s a job that allowed him to save historic Ohio dirt track Eldora Speedway, to hire Sprint car drivers in various series to drive for Tony Stewart Racing, and to become co-owner of NASCAR’s fourcar Stewart-Haas Racing.

He owns homes and planes and has more money than he can ever spend. But it’s a business and the 38 weekends a year feeds the beast and the hundreds of employees at the empire Stewart has built. Good work if you can get it for a blue-collar Indiana native who once drove a tow truck past Indianapolis Motor Speedway, fantasizing about the chance to race there one day.

His heart, though, is in Lawrenceburg, Indiana, New Egypt, New Jersey, Knoxville, Iowa, Tulsa — all those storied little tracks around the country where the racing is considered real. He shows up for the racing and for the crowd, where many fans get their only shot to see him race in person. They can’t afford a NASCAR race.

This is Stewart, the real Stewart.

Because there was a Sprint car race nearby. Because he had a car calling his name. And because it’s his life and he’s going to live it anyway he pleases. Take him or leave him, but that’s the essence of Smoke. He’s true to himself and true to his roots, and the one thing he loves most in his life will now haunt him forever.