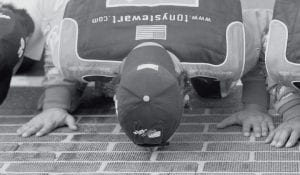 Stewart knelt and kissed the famous brick finish line at Indianapolis Motor Speedway after his win there Sunday. (AP photo)

Tony Stewart is witty and engaging, a superstar who can captivate an audience. He also can be rude and condescending, the kind of guy most people can’t stand to be around.

It’s impossible to predict which Stewart will show up at the race track each weekend.

But the two-time NASCAR champion proved Sunday at his beloved Indianapolis Motor Speedway that things sure are easier when he’s playing nice. He stormed to his second win in three years at the Brickyard, a track that had tormented him for almost a decade in his pursuit of just one magical moment on the historic oval.

When he finally did it in 2005, he knocked a weight off his shoulders that had been building since childhood, when he and his father made the 45-mile trip from Columbus, Ind., to watch their heroes race every year. But that breakthrough win didn’t change Stewart, who is still equally prone to outbursts as he is to practical jokes and kind gestures.

The one thing it did do, though, was make “Tony the Terrible” understand that success is probably more attainable when he isn’t miserable. So he’s capable now of relaxing a bit at Indy and not stressing over the outcome of one Sunday a year.

It was so clear last week that win or lose, Stewart would be fine.

He arrived in Indianapolis buoyed by his July 15 win at Chicago, his first of the season, and relaxed from a quick getaway to the Bahamas. He was playful while waiting out a rain delay on Friday with his crew, and spent time joking in his garage stall with good friend Kevin Harvick.

When he turned to meet the media for his weekly availability – a session that has a history of going from cordial to caustic in an eye blink – Stewart might have set a record by keeping it light for all but two questions.

Someone joked with Stewart that his medication appeared to be working.

“Yeah, and I only have to take eight pills a day,” he quipped.

That banter led some to believe Stewart was poised to win Sunday’s race. He had the momentum from the Chicago win and the mind-set of a guy destined for another Brickyard victory.

He stretched it through the weekend and into the race, where he led a race-high 65 laps. And unlike his 2005 win, when he was silent on the radio and near panic during a final pit stop – even admitting to crew chief Greg Zipadelli he was too nervous to discuss strategy – Stewart appeared to be out for a Sunday drive this time.

He joked midway through that Zipadelli needed a pillow because things were going so well, and he taunted Harvick after losing the lead to him on a restart with 20 laps to go. As he chased his buddy down, he called on his radio: “Here kitty, kitty, kitty. Come get you some of this.”

After passing Harvick with 10 laps to go, Stewart went into cruise control and was caught on his in-car camera taking a casual drink of water as he used his knees to control the steering wheel at nearly 200 mph.

But after kissing the Yard of Bricks for the second time in his career, Stewart said despite his demeanor all weekend, he never once believed victory was certain.

But he admitted a clear head certainly didn’t hurt.

“When you come off a week like that, you’re pumped up,” he said. “You come to, what to me, is my biggest race of the year, and the moon and the stars aligned.”

In typical Stewart fashion, though, the weekend wasn’t controversy free. He’s feuding with ESPN, the network that just took over its share of the season broadcasting rights, and doesn’t want to talk to its reporters. And he christened their first Cup broadcast by uttering a profanity in his post-race interview. The curse will probably get him fined and possibly cost him points, but Stewart didn’t really care.

“Whatever happens, they still can’t take this trophy away from me,” he said.

And despite their friendship, Harvick was less than thrilled with the way Stewart raced him in the closing laps. The two cars touched when Stewart grabbed the lead, and the contact ruined Harvick’s handling. Instead of finishing second, he faded to seventh and was called before NASCAR to explain a post-race nudge he gave Stewart.

“He’s always the first one to whine about people not giving him enough room,” Harvick later complained. “I gave him plenty of room all day to race and he winds up knocking the left-front fender off and we wound up finishing seventh. It is what it is.”

Stewart accepted blame for the contact, stressing he made a mistake on the pass. But if Harvick’s feelings are hurt, Stewart will likely tell him to get over it.

Because no matter what happens in Stewart’s life, he’s never going to change who he is. He may be rough around the edges and maddening to deal with, but he’s always true to himself.

“Never have to wonder where you stand with us,” he said. “We’re not going to give the vanilla answer. The people that want the corporate image, clean cut, short hair, no beard, they can pull for someone else.”