‘The Voice, The Guitar, The Songs’ tour to hit Louisville 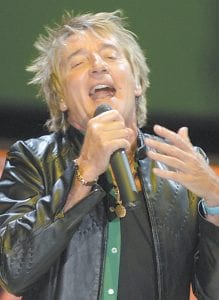 Rock and Roll Hall of Famers Rod Stewart and Santana, two of music’s most influential hit makers and dynamic live performers, will join forces and embark on an 18-concert North American tour this summer that will stop in Louisville at the KFC Yum! Center on Tuesday, June 3.

Kicking-off May 23 in Albany, NY, the tour unites two musical trailblazers who have helped redefine the sound of popular music for the last five decades through their combined love of rock, soul, world rhythms, funk, jazz and blues. Both Stewart and Santana are known for their high-energy, hit-packed live concerts — making the combination an incomparable experience for all music fans.

Tickets will be available to the general public through Ticketmaster for the Louisville show beginning Friday at 10 a.m.

With his distinctive voice, narrative songwriting and passionate live performances, Rod Stewart has built one of the most successful and enduring music careers of all time. In a career spanning more than five decades, he has amassed sales of more than 150 million albums worldwide and has countless charttopping hits and industry accolades — including two inductions into the Rock and Roll Hall of Fame 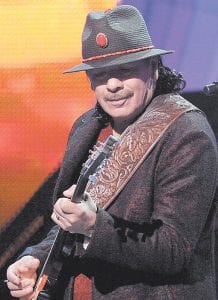 In 2007, he was bestowed Commander of the British Empire (CBE) by the Queen of England. In May 2013, Stewart released Time, his first rock album in a dozen years, on Capitol Records. The album features 11 original tracks and marks Rod’s return to songwriting after nearly two decades. Time entered the UK Albums Chart at No. 1, setting a new British record for the longest gap between chart-topping albums by an artist — and in the U.S., it marked Stewart’s highestcharting album of original material since 1979.

In addition to touring, Stewart headlines one of Las Vegas’ most critically and commercially successful residencies at The Colosseum at Caesars Palace.

For 40 years and as many albums later, Santana has sold more than 100 million records and reached more than 100 million fans at concerts worldwide. To date, Santana has won ten Grammy Awards and three Latin Grammy Awards. He won a record-tying nine Grammys for a single project for 1999’s Supernatural (including Album of the Year and Record of the Year for “Smooth”). He has also received the Billboard Century Award (1996), was ushered into the Rock and Roll Hall of Fame (1998), and received the Billboard Latin Music Awards’ Lifetime Achievement honor (2009).

Among many other honors, Carlos Santana has also been cited by Rolling Stone as #15 on their list of the “100 Greatest Guitarists of All Time.” Celebrating the chart debut of Guitar Heaven (Arista) in 2010, Santana joined the ranks of the Rolling Stones as the only musical act in chart history to score at least one Top 10 album in every decade beginning with the 1960s. He is also currently headlining at a multi-year residency at House of Blues in Las Vegas.

In 2013, Carlos Santana was the recipient of the 2013 Kennedy Center Honors Award. Santana’s new album CORAZÓN (RCA/Sony Latin Iberia) due out May 6 is a collaborative effort with the biggest names in Latin music.