Stewart slides out of contention 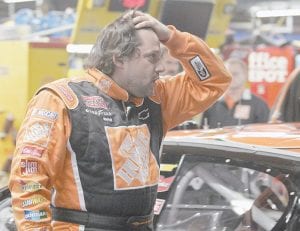 Tony Stewart, pictured last week at Lowe’s Motor Speedway, might be the most talented driver in NASCAR, but his raw emotion has likely cost him a shot at a third Nextel Cup title. (AP Photo/Terry Renna)

Tony Stewart might be NASCAR’s most talented driver, and he’s undoubtedly the most volatile.

His skill has helped him collect two championships, 32 victories and more than $62 million in winnings.

His raw emotion likely has cost him just as much, including a shot at a third Nextel Cup title.

Oh, sure, Stewart still can mount an incredible five-race rally that might put him back in contention. But with five races left in this Chase for the championship, he’s fourth in the standings and fading by the week.

A miserable three-race stretch that can be blamed on bad luck, mental error and a simmering feud with Paul Menard has dropped Stewart from two points out of first to a distant 198-points behind leader Jeff Gordon.

“It isn’t over until you tell me mathematically we can’t do it,” crew chief Greg Zipadelli declared after Saturday night’s race at Lowe’s Motor Speedway.

That kind of thinking might get Stewart and his Joe Gibbs Racing crew a win or two before the season ends. But the reality is it will take a miracle for Stewart to win the title, and that makes him the biggest disappointment of this Chase.

When the Chase started Sept. 16 in New Hampshire, there was tremendous potential for an epic showdown between the top three drivers. Gordon, Jimmie Johnson and Stewart – drivers with a combined eight championships – opened the 10-race title hunt ranked 1-2-3 with just 30 points separating them.

So long as the trio kept up the pace, there was no reason to believe they wouldn’t fight all the way to the Nov. 18 finish.

Gordon, with two Chase wins, and Johnson, with three top-10 finishes, have delivered. Stewart was right with them, until a crazy day in Kansas sent him into a downward spiral.

That race three weeks ago had two lengthy rain delays and a flurry of freak accidents. So when Zipadelli gambled to put Stewart in the lead before the second rain delay, they thought they had the win locked down.

But when racing resumed, Stewart got stacked up in traffic, and slight contact with another car crumpled his fender. Believing the damage was minimal, they decided not to come in for a repair. That backfired horribly when sheet metal rubbed against the tire, causing it to blow.

Stewart’s temper wasn’t far behind, as he angrily slammed equipment through his wrecked car before climbing out for a 39thplace finish.

Kansas was bad luck, but it changed Stewart’s strategy: He no longer could race conservatively if he planned to close the gap.

So his team went all-out at Talladega, where Stewart has finished second a mind-boggling six times. Determined to finally score a win, they ran an aggressive race that contradicted Gordon and Johnson’s strategy. While they hung back, waiting to pounce late, Stewart ran out front for 38 laps.

But when the heavyweights began their charge to the front, Stewart made two tactical errors that cost him the win. He went too wide when he tried to block Johnson, and the slip sent him up the track and out of the lead. That knocked him out of the draft and incapable of preventing the Hendrick Motorsports train when Johnson, Gordon and Casey Mears charged to the front.

Stewart then grew impatient, and pulled out of line way too early in an attempt to get back into the lead. He got almost no help, faded back again and had to work alone to salvage the race.

His day was ruined when he found himself inadvertently pushing Gordon to the win while settling for an eighth-place finish.

Last Saturday, a personal grudge with Menard boiled over on pit road for the second time in this Chase when the rookie refused to give the champion room to work during an early stop.

With his car in a full stop, Stewart was all too aware of the leaders speeding away from pit road without him. When he finally peeled out, he was oblivious to Kasey Kahne coming in and ran right into him.

The incident left Zipadelli frustrated with his driver and their fading title chances.

“The blame is I don’t think (Stewart or Menard) have any respect for each other,” he fumed. “The 15 car was a minor thing, and then everybody got hollering on the radio and we never saw (Kahne). That’s what did the damage, the 15 just scraped the paint off.”

Stewart rallied to finish seventh but lost more ground in the standings as Gordon won for the second straight week.

The frustration seeped from Zipadelli, left behind to speak for the team for the third consecutive race as Stewart was too angry to answer questions.

Technically, Stewart and his team are still in it, but if the driver can’t get his head back in the game, they don’t have a chance.