Stewart wins when heat is on 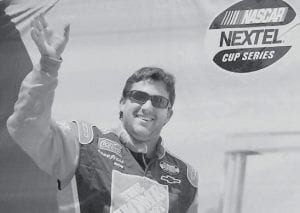 Tony Stewart waved during the NASCAR Nextel Cup Series driver introductions on the track prior to winning the USG Sheetrock 400 auto race at the Chicagoland Speedway on Sunday in Joliet, Ill.(AP Photo/Tim Stewart)

When Denny Hamlin refused to quietly take teammate Tony Stewart’s criticism, it marked a rare occasion of a young driver not rolling over for the two-time NASCAR champion.

And sending word through the media that he didn’t appreciate being publicly blamed for their accident in Daytona showed that Hamlin has the confidence – or ego – to go toe-to-toe with his teammate. After all, the budding young star is the future of Joe Gibbs Racing and probably believes he’s above being bullied.

The public sniping forced team owner Joe Gibbs to interrupt his vacation and make a pit stop in Chicago, where he gave a 30-minute lecture on playing well with others to his top two drivers.

It was a strong stand by Hamlin. A power-play of sorts.

But when it was over, Stewart took to the track to prove he’s still the star of that team.

By driving his way into Victory Lane for the first time this season, and doing it a day after being chastised by Gibbs, Stewart again showed his remarkable ability to thrive during adversity. When the going gets tough, nobody is better than Stewart at ending a controversy by stepping up on the race track.

His resume is checkered with wins that came during controversy, such as the Watkins Glen victory in 2002, which came a week after Stewart punched a photographer, and Chicago in 2004 after he wrecked Kasey Kahne, which led to a fight in the pits between their crews.

Sunday’s win at Chicagoland Speedway proved that Stewart does his best work during the most chaotic times.

“You know, there is something to be said for that,” team president J.D. Gibbs acknowledged. “Of course, with Tony there’s always a lot of chaos going on.”

Most of it self-inflicted, including this spat with Hamlin.

The two were running first and second in the early part of the Pepsi 400 at Daytona a week ago when Stewart ran into the back of Hamlin, causing both cars to crash into the wall. Stewart immediately blamed Hamlin for the accident, claiming the lead driver slowed in front of him.

That explanation was ridiculed by rival drivers, and didn’t sit well with Hamlin.

“Even if it was a situation where I had wrecked him from behind, he still probably shouldn’t have thrown me under the bus as far as he did,” Hamlin said. “He’s still the leader at Joe Gibbs Racing, without a doubt. He’s the guy who really, when I need help, I’ll still go to regardless.

“But there’s a point where being a leader doesn’t make you right.”

Perhaps that’s the message Gibbs sent after escorting Stewart into a meeting with Hamlin that caused both to miss 30 minutes of valuable practice time on Saturday. Whatever the coach said worked, because the teammates were seemingly best buddies by the time it was over.

They laughed and joked during driver introductions, with Stewart playfully putting Hamlin in a headlock in a show for the cameras. And they worked together on the race track, too, using hand signals to communicate track position.

How long the harmony lasts remains to be seen.

It’s not in Stewart’s disposition to play second fiddle to anyone, especially a 26-year-old kid with less than two Nextel Cup seasons under his belt. But as Stewart’s winless streak stretched to 20 races, and Hamlin beat him to Victory Lane this season by winning at New Hampshire earlier this month, Stewart might have felt a bit threatened.

After all, Hamlin made the Chase for the championship last season and finished third in the points. Stewart missed the Chase and wasn’t eligible to defend his 2005 title.

And, Hamlin has spent most of this season locked into secondplace in the standings, while Stewart has hovered around sixth.

If Stewart is the slight bit jealous, he’d never admit it. Besides, his handling of the Daytona disaster spoke volumes.

Barring a total collapse, both will be racing for the Nextel Cup title this season and it will be interesting to watch how the two handle the competition. Because when push comes to shove, Hamlin has shown he’ll shove back.

Stewart, with two titles and 30 wins, can take it right now. He’s earned his spot atop the JGR talent pool, and cemented his position Sunday.

But if Hamlin starts creeping back into Stewart’s spotlight, Gibbs might wind up playing mediator again before the season ends.