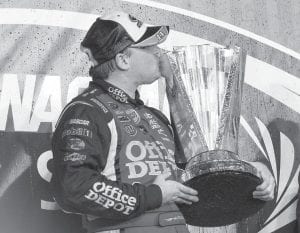 When the rain came at Homestead Miami Speedway, and the drivers climbed from their parked cars, a confident Tony Stewart practically strolled down pit road.

He was in fifth place at the time, had a hole in the front of his Chevrolet, and needed to catch leader Carl Edwards in the race for the Sprint Cup championship.

And yet Stewart didn’t seem to have a care in the world. His demeanor was not of a guy on the ropes, he was cocky and seemingly certain it was his race to lose.

“We are fixin’ to keep delivering this whoopin’. We got more in mind for (Edwards) the rest of the day,” Stewart said during the rain.

Stewart seized his third championship Sunday night with a powerful and relentless drive that will go down with the greatest in NASCAR history.

It was nothing like the driver who nearly wrote off his season during a summer slump, then dismissed his chances at the beginning of NASCAR’s championship chase.

Then something suddenly changed — with his cars, with his attitude, with his driving — and old Smoke was back.

Stewart thrust himself early into title contention, then never let up as he drove all over the competition and chased down Edwards.

His victory gave him a tie in the final Sprint Cup Series standings — good enough to win the title based on his five victories. All of Stewart’s wins came in the Chase, and Edwards’ lone victory this season was in March. It was the first tie in the points standings in NASCAR history.

How good was Stewart, who drove from the back — twice! — and passed 118 cars during the race?

“Not many people can hear your lifelong hero say that. Just really, really flattering,” said Stewart, who wasn’t sure it’s the best drive of his 31-year career, but knew it was pretty strong.

“I feel like I passed half the state of Florida — 118 cars is a lot of cars to pass in one race. To do it under the circumstances and pressure we had, I’m very, very proud of that. I can’t even remember how many races I’ve won, but I would have to say under this set of circumstances I’ve got to believe one of the greatest races of my career.”

Stewart became the first owner/ driver to win the championship since the late Alan Kulwicki in 1992, and the driver to end Jimmie Johnson’s record five-year title run. His last title was in 2005, the year before Johnson’s began his reign.

Stewart overcame the hole in his grill, a rain delay, used debatable fuel strategy and made aggressive passes that stunned racing veterans to win Sunday. He’s been driving that way for at least a month, buoyed in part by a race-winning pass of Johnson on the outside at Martinsville that gave him his third Chase victory.

“He’s been the one to go threeand four wide when everyone else is scared and lifts,” said crew chief Darian Grubb, who was told in the middle of the Chase he was being let go at the end of the season because the Stewart-Haas Racing team wasn’t performing. His status is now uncertain.

Edwards, who started the race with a three-point lead in the standings, did everything he could from the minute he arrived in Florida. His Roush-Fenway Racing team put his Ford on the pole, he led a race-high 119 of the 267 laps and still finished a helpless second.

Edwards, who had a 4.9 average finish over the 10 Chase races, was disappointed but held his head high after the race.

“… Those guys rose to the occasion, and they beat us fair and square,” Edwards said. “That is all I had. We came here and sat on the pole, led the most laps and Tony still managed. That’s it. That’s all I got at the end. That’s as hard as I can drive.

“I told my wife, ‘If I can’t win this thing, I’m going to be the best loser NASCAR has ever had.’ So, I’m going to try really hard to keep my head up and know that we’ll just go next year and we’ll be just as hard to beat.”

As third-place finisher Martin Truex Jr. did his post-race news conference, Edwards sat silently off to the side, his eyes fixed on a bank of televisions showing Stewart’s championship celebration.

“If I could do it all over again, there’s nothing I could have done differently,” he whispered. “That’s my maximal effort, and Tony beat us. We knew that of all the circumstances possible, this was the least probable. But I was prepared for this.”

Edwards, despite being the most consistent driver this season and points leader for 21 weeks, has been on the ropes the last month as Stewart turned up his energy, effort and trash-talking. His quick wit and sharp tongue kept the entire industry entertained as he did everything possible to get inside Edwards’ head.

Maybe it was really for Stewart’s benefit, a driver trying to talk himself into believing he had a shot at the title after struggling all summer long. He maybe didn’t rattle Edwards, but Stewart for sure talked himself into this title.

He arrived in Miami insistent he’d race with nothing to lose and did just that from the moment the race began. He was moving through the field from his 15th starting spot when caution came out 14 laps into the race. His Stewart Haas Racing crew discovered a hole in his grill, and the repairs dropped him to 40th in the field.

Stewart then blew by car after car and was up to 23rd in a matter of minutes. Another caution sent him into the pits for more repairs, and he restarted in 32nd.

His yapping then resumed, as he scoffed on his radio how embarrassed Edwards and the No. 99 team would be when Stewart drove from the back of the field — twice! — to beat them.

Edwards, meanwhile, huddled with crew chief Bob Osborne atop the pit box and declined to be interviewed. His Roush Fenway Racing team had to be nervous about engine durability — three Roush Yates engines failed over the course of the race — and Edwards eventually retreated to his motorhome to snack on popcorn and keep his focus.

When racing resumed, Stewart continued to slice through the field and used several spectacular three- and four-wide passes to close in on Edwards. Then crew chief Grubb made an unusual call to keep Stewart out on the track until he was just about out of gas. It was a risky call but worked perfectly when the rain came moments after Stewart finally stopped for gas.

It gave Stewart breathing room as he was able to save gas under yellow. He was fourth on the final restart, Edwards was sixth, and Stewart used a three-wide pass over Kyle Busch, Brad Keselowski and AJ Allmendinger to reclaim the lead.

Although Edwards quickly moved into second, he couldn’t catch Stewart as he sailed to his fifth Chase victory.

“They got 5 wins in 10 races,” Osborne said. “That’s pretty unbelievable. But they did it, and it got them the championship.”

The championship completes a total turnaround for co-owner Gene Haas, who sold half his slumping organization to Stewart in 2008 in a hope the driver could bring a spark to a team that struggled to stay inside the top 35 in points.

“Tony Stewart’s a superstar, we knew that,” Haas said. “You need a wheelman. You can have all the best equipment in the world, and without a wheelman, you don’t have a whole lot.”