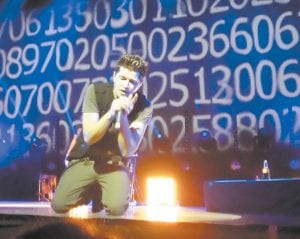 WELL SCRIPTED — Singer Danny O’Donoghue of the Irish band The Script gave fans their money’s worth during a recent performance at the PNC Pavilion in Cincinnati. (Photo by Kennedy/Cassidy Breeding)

While thousands of fans were flocking to the Yum Center in Louisville to see Katy Perry, Irish natives The Script were a mere one-hour car ride away at Cincinnati’s PNC Pavilion preparing to rock an equally enthusiastic crowd. Though the odds of The Script having a packed house were slim, on this night they had the luck of the Irish on their side.

While the surprisingly large crowd was packing in and preparing for the headliners, they heard the musical styling of SafetySuite, a band climbing up the Billboard chart. SafetySuite made sure to involve the crowd while singing songs such as “Anywhere But Here,” “Someone Like You” and their biggest hit, “Stay.” The up and coming band from Nashville went as far as taking a crowd member’s camera to snap pictures of themselves onstage for the lucky fan.

After SafetySuite left the stage, the crowd grew even more excited for the concert that was coming soon. The lights dimmed for a second time and The Script finally started playing. As soon as the music reached to the crowd’s ears, a single spotlight shone down upon guitarist Mark Sheehan. Then a second spotlight hit Glen Power, the band’s drummer. The third spotlight lit up to reveal a microphone standing alone, but when lead singer Danny O’Donoghue stepped into the glow of the light, there was no doubt in everyone’s mind that this trio would outshine the show Ms. Perry was putting on down the Ohio River. 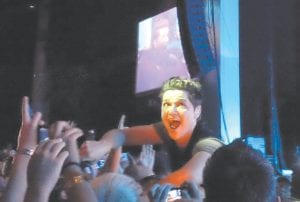 The band started its set playing both new and old songs, including “You Won’t Feel a Thing,” “The Man Who Can’t Be Moved,” and its first American single, “We Cry.” The Irishmen also took time to acknowledge the crowd’s amazing participation. “Even though we are more than 3,000 miles away from our home, you guys are making us feel more than welcome,” said O’Donoghue. The band then shifted into songs such as “Dead Man Walking,” “Rusty Halo,” and “Nothing,” a song that has been making its way up the charts the past few weeks.

After running through 11 songs, the members of The Script ended the first set by playing their most popular song, “Breakeven.” They then left the stage and were cheered back into the spotlight for an encore. After O’Donoghue sang the opening lyrics of “For The First Time” the entire crowd joined in to help The Script sing the song, especially during final words, “Oh these times are hard, yeah they’re making us crazy, don’t give up on me baby.”

While the band was exiting the stage and the venue’s lights were switched back on, the crowd was still chanting along with the song. The concertgoers were making it clear what O’Donoghue meant when he said that even though the members of The Script were more than 3,000 miles away from where they live, they still felt at home on this recent September night.

Kennedy and Cassidy Breeding are sisters and are freshmen at Letcher County Central High School.