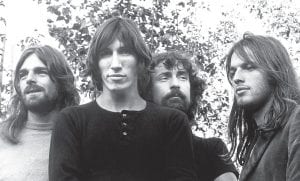 This week in 1973, the Pink Floyd album “The Dark Side of the Moon” was first released in the U.S. by Capitol Records (the British release came nearly two weeks later). The album continues to be in wide demand and had charted on Billboard’s Top 200 albums list a record 917 weeks by the end of 2015. Richard Wright (left), Roger Waters, Nick Mason and David Gilmour in a 1972 promo shot taken just a few weeks before the release of “Dark Side of the Moon.”