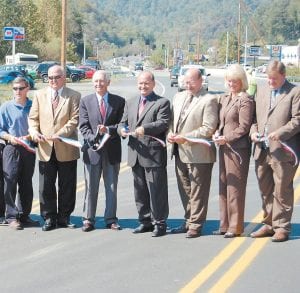 “It is going to make driving a lot easier and a lot safer for people who live and shop here in Whitesburg,” said Gov. Steve Beshear, who was in Whitesburg Sept. 29 for a ribbon-cutting ceremony for the road project.

Beshear said the congested stretch of KY 15 has been a traffic nightmare for people wanting to do business at the west end of the Whitesburg commercial district for many years.

“There wasn’t a clear center turn lane, which meant folks needing to turn left, regardless of what direction they were traveling in, would regularly cause traffic to back up behind them,” said Beshear. “It was not just an inconvenience, although it was that, it was an outright safety hazard. There have been too many fender benders to count on this relatively short stretch of highway. Plus there have been more serious crashes as well.”

The $3.33 million project, of which $1.78 million was funded through the American Recovery and Reinvestment Act, often referred to as stimulus money, included the creation of a continuous center turn lane and the widening of two bridges.

Beshear said the project was sorely needed for a long time, but funding was just not available.

“I want to tell you that the $45 million that Kentucky received for transportation projects is one of the good things that came out of the Recovery and Reinvestment Act,” Beshear said of the funding law championed by President Barack Obama. “We simply didn’t have the money to do a lot of projects. With this recession, it cut down on the amount of money we had in the road fund.”

Design plans for the project were created in 2003 and with stimulus money to help fund the project the plans came to fruition.

“This has been a project that we have worked on for a long time, knowing that the need was here, knowing that problems existed,” said Kevin Damron, chief district engineer for Kentucky Transportation Cabinet District 12. “It’s a long, overdue project.”

“Anytime you have backups you have the possibility of accidents,” said Childers.

Childers said since completion of the road improvements, which will tremendously reduce the possibility of accidents, traffic is flowing smoothly.

“Not only does everything work as it is designed to work, it looks good,” said Childers.

Damron referred to a recent comment in the Speak Your Piece column in The Mountain Eagle pertaining to the road construction project.

The caller to Speak Your Piece said, “I thank my lucky stars that the horrible traffic bottleneck at the west end of Whitesburg is fi- nally fixed, thanks to the economic stimulus program. While enjoying the free-flowing traffic our grandchildren will never know what a malfunction junction used to exist there. In other words the money is not gone. It bought us something we really needed and will have from now on.”

“I thought that was appropriately said,” said Kevin Damron. “It would only seem appropriate in Letcher County and Whitesburg, if you are going to talk about something that is a good government project or a good community need you obviously have to turn to experts. And in Letcher County and Whitesburg, we know the experts on the subject of anything usually speak up in The Mountain Eagle under Speak Your Piece. So we have turned to the experts of the region.”