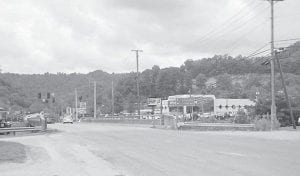 Work began this week on a construction project to widen this portion of KY 15 in West Whitesburg. Contractors have been given 130 working days to complete the work, which will cause traffic delays.

Funding from the American Recovery and Reinvestment Act, also known as stimulus money, has come to Letcher County. The long-awaited improvements to KY 15 in West Whitesburg, including widening two bridges, officially began August 6.

Signs are up and milling has begun at the intersection of KY 15 and KY 15X in Whitesburg. The project boundaries are from Dayton Street going toward downtown Whitesburg through the KY 15 intersection to the KY 931 intersection.

“The roadway and two bridges will be widened to three lanes where now there are only two,” said Chief District Engineer Kevin Damron. “The center lane will be a left turn lane. This means that left turn access will be available throughout the entire project limits. Vehicles constantly back up on this stretch of road waiting for other motorists to make left turns, causing considerable traffic congestion.”

Damron said that widening the bridges and the highway will relieve congestion, thereby enhancing safety and improving the level of service through the intersection of KY 15X with KY 15 as well as KY 931 on the northeast end of the project.

“This is the kind of project that everyone will love when it’s finished,” said Damron. “Not so much, though, while the work is under way. There will be delays that will no doubt be frustrating, so we really need people to be patient and understanding.”