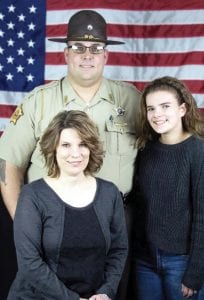 A state-mandated tax settlement at the end of an outgoing sheriff ’s term coupled with late mineral tax bills issued by the state means Sheriff-elect Mickey Stines will be seriously shorthanded and seriously short on money when he takes office on January 7.

Stines said the transition from Sheriff Danny Webb, who leaves office January 6 as the longest-serving sheriff in the county’s history, is “going fine,” but money will be tight when he takes office next week.

“The biggest problem is at the first of the year, the sheriff ’s office starts with zero money,” Stines said.

State law says an outgoing sheriff must make a settlement — pay off all bills and remit all collected taxes — at the end of his term. The incoming sheriff starts with little or no money in the accounts, and any tax bills that have not yet been collected.

That means Stines’s office won’t have much to work with until it begins collecting taxes this month.

Stines has already hired some of his staff, but he won’t be able to hire most until money starts flowing. He said Billy Jones, a Blackey native who has retired from the Nicholasville Police Department, has been approved by the Letcher County Board of Education to serve as school resource officer at Letcher County Central High School, and the sheriff ’s department will receive reimbursement from the school board for his salary. The department also receives part of the money for circuit court bailiff Mike Enfusse and new district court bailiff Ben Fields.

Other than that, Stines said the department will consist of himself, office manager LaShawna Frazier and one deputy, Josh Pease of Craft’s Colly, who has been a deputy and a Salyersville police officer in the past.

Stines said he has not decided on who else will be working at the department.

“In three or four months, if the public will be patient with me, we’ll be back to full strength,” Stines said, explaining that he meant the same number of deputies Webb had in the past.

Stines’s department will have equipment to work with. He said Webb leaves the nearly new pickup truck he has been driving, four good cars and another car and SUV that are usable, but not in as good condition as the others. He said the fiscal court has also promised to give him at least one and possibly two of its SUVs as well. While the court voted to pay retirement and health insurance — something that had been cut from Webb’s budget — Stines said he knows some of those things might not pan out.

“They (the new fiscal court) will have to sit down and see how much money they have to work with. If the money’s not there, it’s not there,” he said.

Stines said once the department is back to a full staff, he plans to work on arresting drug dealers, but also on helping addicts get off drugs. He said there are also about 2,500 warrants and summonses that will need to be served.

Stines, 38, worked for seven months as a Neon police officer in 2001, for about a year for Sheriff Steven Banks in 2002, and has been a bailiff under Webb since Webb took office in January 2003.

“I’ve got some big shoes to fill, but I’m going to do my best,” Stines said. “I really appreciate the people of Letcher County having the confidence in me to serve as their sheriff for the next four years and I won’t let them down. My door will be open to everybody.”