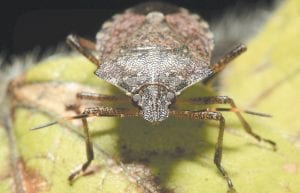 The brown marmorated stink bug is seen in this photo. The relatively new pest originally from Asia is expected to wreak havoc in parts of Letcher County. (AP photo)

Three years ago a local extension agent predicted that another pest beside ladybugs may be on its way to Letcher County.

On Tuesday, Shad Baker, Letcher County extension agent for agricultural and natural resources, talked to a homeowner in Payne Gap who says thousands of brown marmorated stink bugs are all over the residence.

“We saw it coming,” said Baker. “It was predicted to happen.”

Stink bugs are being found in higher elevation spots with evening sun, similar to where ladybugs are found, Baker said.

“They will accumulate or congregate like ladybugs in cracks and crevices of houses,” said Baker.

The bug has been sighted in the county, but not in large quantities. Baker deemed the situation at the Payne Gap residence as the first case of nuisance in the county.

“It’s pretty bad,” said Baker. “They were all over the house. They were covered up with them.”

“I’m sure there are more,” said Baker. “They will come in the thousands.”

The shield-shaped bug is cocoa brown in color and has two white bands on its antennas. Marmorated stink bugs have a white or pale abdomen.

The insect, which is about 5/8 of an inch long and 3/8 of an inch wide, was introduced into the United States in the late 1990’s from China, Japan and Korea.

Three Octobers ago, Bak- er was quoted in a Mountain Eagle article saying that the insect could be in abundance in the county in a couple of years.

Baker cut short a hiking trip on the Appalachian Trail in northern Virginia and central Maryland in October 2010 after deciding he couldn’t deal with the large clusters of stink bugs any longer.

It is hard to describe the potent smell, Baker said, which he referred to as fume-like. He also said the smell is tough to get out of materials.

“The more you smell it, the worse it gets,” said Baker. “After awhile it is almost nauseating. It’s really bad.”

Marmorated stink bugs were found in the Kentucky counties of Boyd, Jefferson and Greenup in 2010.

“I can’t stress enough the importance of sealing up all entrances,” said Baker.

Baker suggests that homeowners spray the insecticide malathion outside houses as according the label.

The insecticide will deter the bugs from getting into cracks of homes.

Baker said stink bugs could end up being a worse pest than ladybugs. He said the stink bug outbreak may be like the ladybugs that came on strong, peaked and then leveled off.