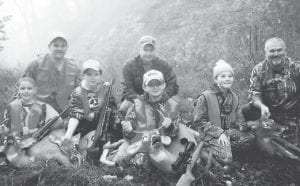 The recent George M. and Sally Banks Adams reunion was held at the Stuart Robinson Dining Hall was enjoyed by many. The crowd was small this year and Luther Adams and his family couldn’t make it. We missed them, but understood.

Danola Adams Bell, her son, daughter-in-law and grandson, all came in from the Dayton area; Bill and Joyce Adams and Alice Adams, also made it, along with many cousins and friends.

We had a stir-off at the mouth of Blair Branch at Ellis Adams’s cane mill. We sure did miss Ellis, but appreciated all who came out to help. The cane was grown on the land that has been in the J.T. Smith family for over 100 years, and those who remember his son, the late Dee Smith, recall him making molasses not only on that property, but throughout the area.

Dee’s great-great-grandson, Hunter Banks, who is 12 years old, helped us cut the cane and worked at the stir-off, too.

Don and Coreen Pridemore had all of their immediate family who live here, except for Noah Campbell, helping out, from us children, down to their greatgrandchildren. Dad and Jerry Adams grew the cane, and at the end it yielded 11 gallons of good molasses, a little thick, but goodtasting.

Lots of folks who were here for Blackey Day stopped by my shop last Saturday. All said they had a good time at the festival.

Jack Salyers and his wife Jackie of Indiana — Jack is originally from Carbon Glow — stayed and talked with Bob and me for a few hours. We really enjoyed their visit. He is a son of Nelse and Dicey Salyers.

Everyone at Mount Olivet Church at Blackey was happy to have Irene Jent able to attend. She stays with her daughter Debbie and her family in Indiana since she had her stroke. She was well enough to make the trip back home for the weekend of Oct. 5 and 6.

The Letcher Area Homemakers had our October meeting at the Carcassonne Community Center last Tuesday. The quilting ladies were nice enough to fix us lunch, and we enjoyed meeting at the historic old school.

Gwen Fields brought a picture of her mother, Clara, who was the first girl to graduate from the school. I’m sorry that I forgot the name of the first boy to graduate. Many had memories of going to square dances or other functions they attended there.

Marcia Caudill and Nona Roark had taught school at Carcassonne in the ‘70s.

Danna’s daughter, Beth Smith Pratt and her daughters, Maggie and Audrey, came to visit with us, and Maggie enjoyed the playground.

Mary Jane Back had her grandson, Isaiah, and Gail Roark also brought her granddaughter.

We got word later that day that Beth’s father-inlaw, Steve Pratt, had been injured in a logging accident and was flown to UK. He had various injuries, but was doing well enough to be released on Friday, but will have quite a long recovery.

Bob and I took Rodney and Geraldine Ison on a four-wheeler ride to the top of Carbon Glow and around Doty Creek. We all enjoyed the beautiful mountains.

I hope Jenette Adams and Shirley Adams of Blair Branch are feeling better this week.

Susan Ison and Doreen Calhoun have spent much of the past few weeks at the hospital in Louisville with Wendell. They stay with family while they’re there, which makes it a little easier.

Mike and Marcia Caudill spent a couple of weeks out West recently. They toured New Mexico, Nevada, Arizona and California. Some spots they visited were Lake Havasu, the Grand Canyon, and the London Bridge. I’m glad they had a good trip.

Hope everyone is enjoying the beautiful weather.

There’s a good-looking picture of local boys and girls who did well in the youth deer hunt in this week’s Eagle. I’m happy for them all.