Stomach troubles? Swallowing a tiny robot may be cure

By MATT O’BRIEN
The Associated Press 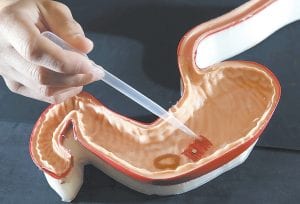 Steven Guitron, a mechanical engineering masters student at the Massachusetts Institute of Technology, points a pipette at a tiny “origami robot” floating toward a “wound” in a stomach model in Cambridge, Mass. Guitron, and others at MIT have developed these tiny ingestible robots which are “folded up” — hence the name — and swallowed in order to complete certain tasks within the body. (AP Photo/Elise Amendola)

Has your child swallowed a small battery? In the future, a tiny robot made from pig gut could capture it and expel it.

Researchers at the Massachusetts Institute of Technology are designing an ingestible robot that could bpatch wounds, deliver medicine or dislodge a foreign object. They call their experiment an “origami robot” because the accordionshaped gadget gets folded up and frozen into an ice capsule.

“ You swallow the robot, and when it gets to your stomach the ice melts and the robot unfolds,” said Daniela Rus, a professor who directs MIT’s Computer Science and Artificial Intelligence Laboratory. “Then, we can direct it to a very precise location.”

It’s still a long way before the device can be deployed in a human or animal. In the meantime, the researchers have created an artificial stomach made of silicone to test it.

Rus said one of the robot’s most important missions could be to save the lives of children who swallow the disc-shaped button batteries that increasingly power electronic devices. If swallowed, the battery can quickly burn through the stomach lining and be fatal.

The robots could seek out and capture the battery before it causes too much damage, pushing it down through the gastrointestinal tract and out of the body.

The robot’s flexible frame is biodegradable, made of the same dried pig intestine used for sausage casing. The researchers scoured markets in Boston’s Chinatown before finding the right material to build an agile robot body that could dissolve once its mission was accomplished.

“They tried rice paper and sugar paper and hydrogel paper, all sorts of different materials,” Rus said. “We found that sausage casing has the best properties when it comes to folding and unfolding and controllability.”

Embedded in its meaty body — it wouldn’t be hard to make a kosher version, Rus said — is a neodymium magnet that looks like a tiny metal cube.

Magnetic forces control its movement. Researchers use remote-control joysticks to change the magnetic field, allowing the robot to slip and crawl through the stomach on the way to the object it is trying to retrieve or the wound where it must deliver drugs.

Would it hurt to ingest a robot? Probably not, said research team member Steven Guitron, an MIT graduate student in mechanical engineering.

“I’m sure if you swallowed an ice cube accidently, it’s very similar,” he said.

MIT’s team has a patent pending and presented its research at a robotics conference in Sweden this spring. Rus said medical companies have expressed interest in clinical applications, which require going through the regulatory process of conducting animal and human studies.

“It’s a nifty idea,” but it could be a decade or so before hospitals could use such a device, said William Messner, a professor of mechanical engineering at Tufts University in Massachusetts who is not involved with the project. He said it could also have promise in performing biopsies.

The U.S. Food and Drug Administration “has to get involved with anything like this and they’re rightfully very careful about any kind of medical instrument,” Messner said. “ The big problem is: What if it gets stuck? Now you’ve really got a problem.”

The multidisciplinary project fits into the growing field of soft robotics that coalesced with the 2013 founding of the peer-reviewed Soft Robotics Journal, based at Tufts. The Boston region is a hub for research into the moving machines made of flexible materials that can change shape and size, making them useful for surgery and other complex environments.