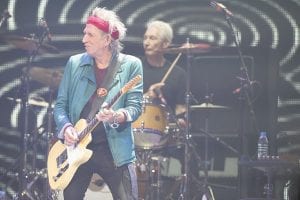 The Rolling Stones have announced that Bruce Springsteen, Lady Gaga and the Black Keys will join the band on stage for their final 50 & Counting concert at the Prudential Center in Newark, New Jersey on Saturday (December 15). The concert event will be telecast live via pay-per-view at 9 p.m., offering fans in Letcher County and around the world the best seat in the house.

The pay-per-view is entitled One More Shot and will be distributed by WWE. It will be available locally to customers of TVS Cable and Inter Mountain Cable with access to iN Demand. It will also be available to DirecTV and Dish Network subscribers.

“We’re excited these extraordinary artists, Bruce Springsteen, Lady Gaga and the Black Keys, have agreed to help celebrate our 50th Anniversary as we share the night live with our fans all over the world. Now the fun begins of trying to figure out the best songs to perform together,” said the Rolling Stones.

The Stones were scheduled to perform Wednesday night at the “12-12-12” concert at Madison Square Garden in New York City to raise money for victims of Superstorm Sandy.