Stoops apologizes, as he should have 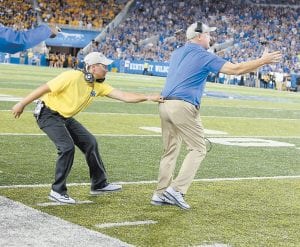 FLEEING THE SCENE OF AN ACCIDENT? WELL … It would be hard to blame Kentucky coach Mark Stoops for running as hard as he could to get out of Commonwealth Stadium in Lexington last Saturday night after his team blew a 35-10 halftime lead while on its way to losing to Southern Mississippi, 44-35. Stoops called the loss embarrassing and apologized fans after the game. (Vicky Graff Photo)

Okay, there is no way to avoid Kentucky’s 44-35 loss to Southern Mississippi to open Mark Stoops’s fourth season in Lexington.

Kentucky raced to a 35-10 lead in the second quarter and then just imploded with turnovers, poor tackling and few if any adjustments.

Stoops apologized to UK fans after the game — and should have. It was an embarrassing second-half effort from his team and makes his future at Kentucky a legitimate discussion item. No longer can former coach Joker Phillips be blamed for the lack of talent on the team as 90 percent of the team now was recruited by Stoops and his staff.

Kentucky has spent big money on the stadium and training facility — and passed a lot of the cost on to season-ticket holders in various ways. But the frustration level with the UK fan base is as high now as I can remember after former offensive coordinator Shannon Dawson, who was fired after one year by Stoops in December, helped the Southern Miss offense shred UK for 554 yards and run an incredible 95 plays.

But can Kentucky? The Wildcats are now 12-25 in Stoops’s tenure and in the last two games have blown a 21-point lead to Louisville by allowing 31 straight points and a 25-point lead to Southern Miss by giving up 34 in a row.

During his time at UK, Stoops’s team has been outscored 511-366 in the second half. That’s a staggering total and leads to speculation about what goes on at halftime in the UK dressing room.

Freshman linebacker Kash Daniel played only on special teams against Southern Miss. Yet he was visibly upset after the game, so I asked him what message he would have for the diehard UK fans he’s been around all his life in eastern Kentucky.

“I know it is hard for fans to stay loyal to us, especially after tonight. But there are 12 games in a season,” Daniel said. “This team is a very young but a talented team. We are only going to get better. Go back to the drawing board and get better. Don’t bail on us yet.”

Stoops and his staff are going to have to share the same message with recruits. Lafayette star tackle Jedrick Wills was at Saturday’s game along with many of UK’s other top commits or targets. How does UK convince him now not to pick Alabama because at the same time UK was losing, former Madison Southern star Damien Harris was running for 138 yards on nine carries for the Tide in a blowout of Southern Cal. Harris picked Alabama over UK two years ago.

So what does this loss do to recruiting?

Can you remember the last time Kentucky beat Florida in football? My guess is probably not because it was 1986.

Will Kentucky be able to end that 29-game losing streak, the longest consecutive losing streak to one school in the country? After Saturday’s loss, it seems doubtful. The Gators opened as a 16-point favorite.

No one hopes UK can win more than UK senior running back JoJo Kemp, a Florida native. He came to UK determined to help UK win and get to bowl games. Kentucky has won just 12 games in his threeplus seasons.

“We are in the SEC. Nobody said it was going to be easy. We just knew that there would be hard work. We did think we would win more, especially those close games that we had with those little mistakes that cost us,” Kemp said.

His freshman season, Kemp guaranteed a win over Florida.

“I am going to guarantee you this: I am going out there and will play my heart out and play for my team and my family. It’s my senior year and I want to go out with a bang. I can guarantee that,” he said.

After the Southern Miss loss, any guarantee by UK seems shaky.

. No University of Kentucky

basketball fan would be shocked that Scott Padgett’s son is a potential college basketball player. However, Logan Padgett might also have a future in football that could turn out to be better than basketball.

Scott Padgett was on UK’s 1998 national championship team and is now the head coach at Samford University in Birmingham, Ala. Logan is a 6-6 receiver on the Homewood High School football team and power forward on the basketball team.

He was a starter on the class 6A state basketball championship team last year as a freshman and has already received interest from several colleges.

“He has a chance to be good (in football), but I would not call him outstanding yet,” Scott Padgett said. “Football is kind of a religion down here. Very few players play both ways at a big school, so he just plays offense.

“He has a chance to be outstanding. He has a lot of natural athletic ability. He is more college ready in football than basketball right now. If he was 6-10 instead of 6-6, I would say basketball would be first. At 6-6, he is fast, can really jump and is taller than everybody on the field. He has got a long wingspan, too. He has a mismatch every play on the field. They don’t pass a lot on this team, but he can catch the ball.”

Kentucky fans should also remember Chris Hatcher, an assistant coach and offensive coordinator under Hal Mumme. He’s now the head football coach at Samford and his son, Ty, is one of two quarterbacks that Homewood uses.

Scott Padgett actually played football two years at St. Xavier High School. He was on the 1991 team that lost to Clark County in the state championship game.

“We were up most of the game and got beat in the fourth quarter. We had first and goal in the last series and could not get in (the end zone),” Padgett said. “That summer is when I started getting some looks for basketball from some bigger schools.

“When I was at St. X, coach Mike Glaser believed in the three yards and cloud of dust offense and good defense. We did not pass a lot and I was a receiver. If it was third and long or we were around the goal line, he might give me a shot (with a pass). So when a sport is not your first love, it’s hard to keep going through twoa day drills and getting hit if you are not catching the ball. I just decided to stick with basketball.”

Gary Estwick of al.com says he has no doubt that Logan Padgett has basketball as his favorite sport, but also loves to “excel at any sport he suits up with” much like his father did.

“Here’s the funny thing: Usually, when we talk about teenage athletes, the conversation goes, ‘If he can grow two or three more inches …’ With Logan, the football conversation is, ‘If he can not grow another two inches,’ he’d be a great college football player,” Estwick said. “One of the football coaches jokingly told me they should put a brick on his head to stop him from growing.”

Logan Padgett has played football since third grade. His father thought it would help “toughen him up” and give him something else to do. He played defensive end and receiver and immediately had success in football.

“Down here, he probably gets more attention for having a decent football game than if he has a great basketball game,” Scott Padgett said. “How good he gets in basketball depends on how much he grows. If he is 6-10, and doctors say there is a chance, he will be really good.

“He’s a lot like me, a faceup 4 who can spread the floor. But he’s more like Derek Willis. He is a lot more athletic than me. He can really jump and is fast. He runs the 40 (-yard dash) in 4.6 (seconds). He has some natural athletic talent that I think he got from his mom, not me.”

Estwick says Scott Padgett has had a definite influence on his son.

“ You can tell he’s a coach’s son. He has an understanding about the game – whatever sport he plays. He understands the ‘why do we do this’ long before teammates. And he wants to share any information that can make them better. He told me he’d love to be a player’s coach on the football field,” Estwick said.

That would probably make his father happy. For now, Scott Padgett is just glad his son is making his own name.