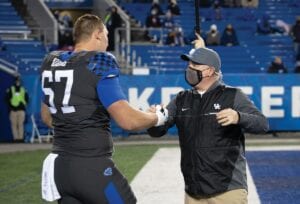 UK football coach Mark Stoops shakes hands with star offensive lineman Landon Young before last Saturday’s “Senior Night” win over South Carolina. Stoops says this season has been one of the “most trying coaching experiences” he has encountered and he knows it also took a toll on his players. (SEC Photo)

Trying to express the emotional strain his players went through this season was something coach Mark Stoops said he really could not put into words.

It started during the offseason when linebacker Chris Oats, who was expected to be one of the team’s captains and best players, had a medical issue that left him in a wheelchair. COVID-19 protocols isolated players a lot and they had to deal with offensive line coach John Schlarman’s death at midseason.

“The players literally watched one of their heroes deteriorate and eventually pass away and it was devastating for them,” said one person close to the UK football program. “It’s just hard for the general public and media to understand how difficult this season has been for players and coaches.”

Kentucky has also played three teams in the top 10 — Alabama, Georgia and Florida — the second half of the season.

“I don’t really want to get into specific words or details on how difficult it is because people will say it is an excuse. I think you and I personally know about it and I know it’s been definitely one of the most trying times,” Stoops said when I asked him about the emotional strain of this season before the South Carolina game.

“Certainly, one of the most trying coaching experiences of my life and I’ve been through some tough ones. But again, I don’t really want that to be the headline because it’s about the players. I am paid to do this job, I can accept it, I can shoulder it, I’ll be fine. I do care about our players and I do care about their mental and physical well-being. It’s been very trying on them.”

Stoops is proud of his team’s resilience during the year. Not a single player opted out until cornerback Kelvin Joseph did last week. Kentucky also played at Alabama without 16 players and some staff members due to COVID and then had 18 players and 10 staff members missing at Alabama when it played. It was close to 20 again last week against South Carolina. 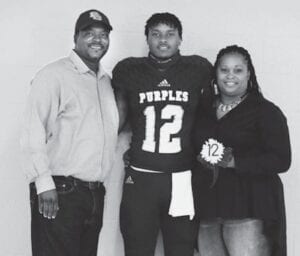 Bowling Green High School tight end Jordan Dingle — with his parents — made a list of pros and cons for each school on his final college list that helped him decide Kentucky was the right school for him.

“We have had players not play to the standard that they expect of themselves, that we expect out of them. That’s coaching, that’s us getting through it, it’s us dealing with circumstances. Some people deal with better than others. But I still love each and every one of them,” the UK coach said.

“They have really fought, and I think it does say a lot about us because it’s really easy to look around the country. It’s really easy to just say I give, I submit, I quit and look for a rock to hide under but no one’s doing that here and we aren’t going to do that.

“I appreciate that and I respect our players and it says a lot about them. I do love this team.”

Kentucky finished the regular season with a 41-18 win over South Carolina and about 13 hours later Stoops announced offensive coordinator Eddie Gran and quarterback coach Darin Hinshaw would not be back next year. Kentucky’s offense ranked 105th out of 127 nationally in scoring and 117th in total yards per game.

Stoops said he had a good relationship with both coaches.

“It was a difficult time, but I also have to recognize I have a responsibility to our players, to our fans, to our administration,” Stoops said about the coaching dismissals. “Sometimes change is necessary. I felt like this is certainly one of those times.” s

The 6-5, 235-pound Bowling Green tight end is one of the players expected to sign with Kentucky next week after verbally committing to the Cats over Purdue, Vanderbilt, Virginia Tech and Georgia Tech.

“He wrote down all the pros and cons for all the places recruiting him,” said Justice Dingle Sr., Jordan’s father. “Kentucky, Vanderbilt, Purdue, Georgia Tech and Virginia Tech were the ones he honed in on above Ohio State and others where he also had offers.

“A lot of folks thought he would go to Purdue. A lot were banking on Vanderbilt because of his high academics. Some thought Purdue because of his relationship with (assistant coach) Ryan Wallace who is from Bowling Green.”

Arkansas, South Carolina, Louisville and others had also offered for Dingle, who ranks among the top 20 tight ends in the 2021 recruiting class. He had 35 catches for 474 yards and five scores in 2019 and has 36 catches for 473 yards and two scores in 10 games this year and is one of six Purples with 10 or more catches on a team that averages only about 20 passes per game. Bowling Green plays at Covington Catholic in the Class 5-A state semifinals Friday.

Kentucky is not known for featuring tight ends in the passing game under coach Mark Stoops but has recently, including when Dingle was watching which helped convince him what could happen in future with the offense.

“He sees how the program has continued to grow year after year. He has a good relationship with Stoops and (recruiting coordinator/ tight ends coach Vince) Marrow. They recruited him harder than any other coaches,” Justice Dingle said.

“One of the things coach Stoops talked to us about was that he wanted really good athletic tight ends on the team so he can throw more. He has not really had the tight ends that can run routes like Jordan and has the athletic ability that he has.

“Coach Stoops also told us he would take care of our son and that UK had everything he wanted academically and athletically. They were very persistent with their recruiting.”

“UK has a great program and has both an undergrad and Master’s program in his major. Nobody else on his list had anything like that,” Dingle’s father said.

Dingle can also look like a hybrid receiver on the field and sometimes his athleticism makes it easy to not realize how big he is.

“When he comes off that line he puts his mind on he is a receiver with how well he runs routes,” his father said. “He uses his hands well and has good footwork. He’s a very balanced kid, very smart. He knows all the positions because of how he studies the game.

“He can block but he’s also really able to go catch the ball. You will be really impressed after he catches the ball. Normally in high school it will take four or five guys to drag him down. He drags people with him. A lot of college coaches really like that he would get five to 10 yards after catching the ball every time. I don’t think you will ever see one guy pull him down in high school.”

Dingle is a three-sport athlete who also plays basketball and runs track. In track, he threw the shot put but also ran the hurdles — an event few his size even attempt. He also played baseball at one time.

“He did the hurdles to help with the flexibility of his hips. That’s one thing coaches told us really helped him. He did that to help with his agility in football and basketball and it worked,” Justice Dingle Sr. said.

Dingle will not be an early enrollee at UK in January because Bowling Green High School does not allow early graduation.

“He would love to enroll in January but he will be fine. He is a very humble, low key kind of kid. He’s not one to make a lot of noise about anything,” Dingle Sr. said. “He is self-driven. You never have to talk to him about academics or staying on top of things. He’s a good kid and a really good football player. We’re very proud of him.” s

Kentucky sophomore Jacob Toppin gave the nation a look at what he could do for UK this year when he got six second-half points in the loss to Kansas.

Maybe his brother, Obi Toppin — the best player in college basketball last season and the recent No. 8 pick in the NBA draft by the New York Knicks — was right about his younger brother’s potential when he said he felt he could one day join him in the NBA.

“It means a lot because that’s my brother and I look up to him. I’m just trying to work every day, getting better in the gym and hopefully one day that dream can come true,” said Toppin, a transfer from Rhode Island.

“I’m from New York so I was always really a New York Knicks fan. And that’s big for my brother because he was a Knicks fan too, so to be able to play for the Knicks, that’s big time,” Jacob Toppin said.

“I’m going to try to watch all the games because I want to see my brother play. I want to see his development and how he does. I’m definitely looking forward to that. I’m just going to keep working every day and hopefully I can get to that point.”

The Toppin brothers got their athleticism from their father.

“I used to watch him play all the time when I was younger whether it was in street ball games or whether it was in the city playing at parks,” Jacob Toppin said. “He is – he was — a great player. He was very energetic like me and my brother and he was very athletic.” s

Somerset quarterback Kiaya Sheron had his stellar high school career end in the Class AA playoffs in a 42-35 loss to Lexington Christian in the second.

Sheron amassed 9,009 total yards and 81 touchdowns in his career and had a 31-5 record as a starting quarterback, including a state championship in 2019.

Somerset coach Robbie Lucas says Sheron will graduate next week and still plans to enroll at Kentucky in January.

“He never stops working. He was up working every morning at 6 a.m. when it was legal (with COVID-19 protocols). He doesn’t miss a lot of time in the weight room,” Sheron said. “He understands the challenges of playing in the SEC. He knows what he has to do and he’ll put the work in to do it.” s

Quote of the Week: “At a place like Kentucky, the fans are so spoiled with winning. And John has incredibly spoiled them with all the winning they’ve done during his tenure. This, I think, is a blip. They’re going to be one of the best teams in our league this year without question,” Mississippi State coach Ben Howland on John Calipari’s team before the Georgia Tech loss.

Quote of the Week 2: “Cat fans want to hang (national championship) banners, not baby-sit half the season until first year players grow up,” college basketball writer and Hall of Fame Dick Weiss on UK fan frustration with so many young players at UK each year after the Kansas loss.