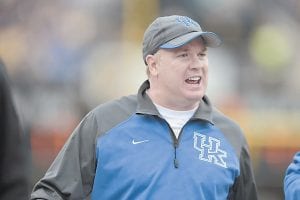 That says something about the Wildcats’ commitment and understanding of the system, and Stoops now expects players to transfer that into on-field execution as they aim for respectability in the tough Southeastern Conference.

“Guys have worked extremely hard and are much more accountable to each other,” Stoops said.

Kentucky is picked to finish last in the SEC East this year as a result, but Stoops believes his young roster can win more games this year and build on that confidence for more success.

“I think we’re real close,” said defensive end Bud Dupree, who recorded 61 tackles and seven sacks last season. “We just have to go out and put it together and win some games. People will start seeing it these first couple of games. We were close to closing the deal, but we really didn’t step on their throats when we needed to and make the right plays.

“We just need to come together as a team and make those plays.”

Kentucky’s veterans are opti- mistic about an upswing thanks to familiarity on both sides of the ball. Stoops praised the upperclassmen’s leadership, which will be critical in welcoming a top-20 recruiting class.

Stoops’ first order of business is choosing a quarterback, a situation he faced last year when he took over for Joker Phillips. The competition is more crowded this time as he and offensive coordinator Neal Brown must choose from a group featuring sophomore Patrick Towles, redshirt freshman Reese Phillips, freshman Drew Barker and junior Maxwell Smith.

Smith is the most experienced of the four, having played parts of three seasons for Kentucky with 11 starts while throwing for 3,070 yards and 21 touchdowns. But he’s coming back from an injury that kept him out of spring drills and opened the door for the other three to raise their stock — especially Towles, the early favorite after an impressive showing in the spring game.

Stoops and Brown ideally hope their decision can be made quickly to help accelerate the execution of the up-tempo, pass-oriented Air Raid system that was grounded for the most part in 2013. No matter how long the process takes, Brown believes the offense will improve because of the commitment the group has made.

“They put so much time and effort into it,” he said. “Fundamentally, we’re going to be better. They know what to do.”

An unusual overlap of the beginning of practice and the end of summer school has resulted in initial workouts being held early in the morning. The Wildcats will conduct open practices on Aug. 11, 12 and 18 with Fan Day set for Saturday.

Kentucky opens the regular season on Aug. 30 against Tennessee-Martin.