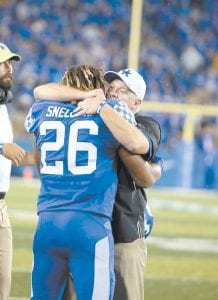 Seeing Kentucky back in the Associated Press top 25 for the first time in 11 years after its win over Mississippi State shows just how far Coach Mark Stoops has come with his rebuilding program.

But something Stoops said after the Mississippi State win just jumped out at me.

“We wanted to make sure we were not overly complex (on defense). When they (Mississippi State) start getting into all the things they do, we can beat ourselves,” Stoops said. “We are good enough to play straight up. Just overall a really good effort because our players played very well.”

Kentucky certainly could not have played “straight up” against a top 15 team when Stoops got to UK and won and I’m not sure how often in my 43 years of covering the Cats that UK could have done that except maybe in 1976, 1977 and 2007.

Obviously others are paying attention because not only did UK jump into the ranking at No. 17, but State also stayed in the poll at No. 23 rather than falling out after a loss to an unranked team.

“I always said this team is different. Guys are coming in for extra film,” Snell said. “The young guys want to come in and watch extra film. The defense wants to know what happens and I will give them my opinion. This team just wants to get better.

“For this Kentucky team to be great, it’s about finishing and wearing teams down. For this team to be different, we have to win games.”

And for those wondering if Snell, who had four touchdowns against Mississippi State, can be a legitimate Heisman Trophy contender, consider this: He has 87 carries for 540 yards and seven scores and three receptions for 15 yards. When Alabama running back Derrick Henry won the Heisman in 2015, he had 67 carries for 420 yards and eight scores and seven receptions for 51 yards in his first four games.

Sure, there’s eight games still left in the regular season, but if UK keeps winning and Snell keeps this up for a few more games he’s going to have to be in the Heisman conversation.

“He didn’t get to where he is by just pure luck. This man has worked his tail off his whole life,” UK junior linebacker Kash Daniel said. “He comes in day in, day out and works. He is one of the best running backs in the SEC but he always tries to get better.

“He is an awesome teammate. He never lets things get over his head. He always talks about the offensive line. He is a true teammate. I love Benny.”

He’s been a successful coach in several sports and a well-respected school administrator in Franklin County. Casey Sparrow has also always been a University of Kentucky sports fan and getting to see the UK football team play and practice — along with meeting coach Mark Stoops and assistant John Schlarman — had special significance for the Mercer County man.

Sparrow has been battling cancer for over four years and recently stopped treatments as he chose quality of life as his first priority now.

“I have good days and bad days,” Sparrow said. “We have started Hospice. People hear that and think the end is near. But we are just meeting with the nurse, having her check on me to make sure I have what I need or she gets it for me. It’s been a little crazy but I feel good. I am able to get up, get out and do what we need to do.”

One of Sparrow’s best friends is Western Hills football coach Don Miller. When Stoops came to watch Western Hills star Wandale Robinson play Sept. 14, the coach’s wife, Jennifer, mentioned to Stoops that Casey Sparrow, a 1989 Franklin County graduate, and his wife Lisa were coming to the UK game the next day. Stoops arranged for the Sparrows to not only get on the field at Kroger Field but also to meet him and Schlarman, who has also been diagnosed with cancer and is undergoing chemotherapy treatments, after the Murray game.

“Coach Schlarman is a really good guy,” Lisa Sparrow said. “He was awesome with us.”

Casey Sparrow and Schlarman started exchanging messages and that led to the Sparrows along with their son, Austin, a former Mercer three-sport standout who is now a student assistant basketball coach at Lindsey Wilson, attending practice last week. Former UK quarterback Freddie Maggard, the UK football director of player development, gave them a tour of the football facilities that left Casey Sparrow impressed.

“There is nothing that a student athlete at UK could use, want or need that is not there,” the former coach said. “There’s no reason for the skill development not to improve in four years. We got to watch practice — and Lisa and Austin were about in convulsions because we were in a video-free zone and they had to put their phones down. But I enjoyed watching the guys. Some were bigger than you think, some were smaller.

“We got to talk to Stoops some between periods (in practice) and I made sure I spoke to coach Schlarman and spent some time with him. I told him that I did not know exactly what he was going through but I know what you’re going though. I told him anything I could do to answer questions about anything, just ask. You really can’t prepare for this but I can share what I’ve tried and done.”

Casey Sparrow is a well-known figure in Kentucky. He coached track, basketball and middle school football at Anderson County and eventually became the head girls’ basketball coach. He moved on to Covington Holmes where his 2002 team (29-6) made the state semifinals before losing to Jackson County. His star player was Miss Basketball Erica Hallman. His wife was one of his assistant coaches.

“I was also offensive coordinator for the football team at Holmes for three years,” Casey Sparrow said. “Once we won the region in basketball, I got into the administrative end and started as assistant principal at Western Hills. But for a while we lived in Georgetown and Lisa ran (coach) Billy Hicks’s middle school program at Scott County.”

He’s planning to keep doing all he can do, including watching UK sports. He’s never been to a UK basketball practice but admits “that would be pretty special” and something he would love to do if the opportunity came like it did with football.

“I am very, very appreciative of what coach Stoops did for me,” Casey Sparrow said. “He didn’t have to do the things he did or go out of his way to make us feel so welcome and special, especially knowing he had such a big game coming up.”

That’s how Stoops is as validated by the way he gave the game ball from Saturday night to Marco Shemwell’s family. He was the four-year-old child hit and killed by a car leaving Kroger Field after watching the UK-Murray State game.

“I’ve been very blessed in my four years battling my disease. It has been tough at times. But the experiences and people I’ve been around, and the good Lord, have taken good care of me and Mark Stoops is just a special man,” Sparrow said.

“It’s not like I am bedridden. I still do what I can do. When I need to rest, I rest. I am operating on about 30 percent of my live functionality. Who knows? It could be one day it (his liver) might say that’s all I have and that’s it but my hope is that 30 percent will just keep kicking tail like it has been and I just keep going on.”

Rivals.com recently released its new rankings for the 2021 basketball recruiting class and Marshall County sophomore point guard Zion Harmon is listed at No. 15 overall — and the top point guard in the class.

Harmon played his third year in the EYBL 17-and-under division this season. He was a starter on Bowling Green’s 2017 state championship team and was the state’s leading scorer as a freshman last year at Adair County.

Only four point guards are listed among the top 35 players in the 2021 recruiting class. Behind Harmon are No 19 Devin Askew of California, No. 30 Khristian Lander of Indiana and No. 31 Cameron Hayes of North Carolina.

“Being from Ohio, I was a Michigan fan. Back then they were turning out running backs left and right,” White said. “I actually came to Kentucky to play for (coach) Bill Curry without much real knowledge of the SEC.

“I had never heard of (UK running back) Moe Williams. Then I watched this guy’s work ethic. He showed me what it would take to succeed in college and he was taking a bruising. I thought, ‘Can I take that?’ It was not all peaches and cream when I first came to Kentucky. It was three yards and clouds of dust.”

“I tried it, so the first half of my freshman season I played defense until running backs started getting hurt,” White said.

Curry was fired and then Hal Mumme took over as head coach. That enabled White’s career to flourish playing for Mumme and with quarterback Tim Couch.

“I don’t think I’m the best to have played running back at UK. I think saying maybe underrated is a better description,” White said. “I did my job but I was on a team with a wealth of athletes. If I got the ball, my first plan was to get a first down and then let my athletic ability take over. I think that’s one thing Tim really liked about me. He knew I would keep the chains moving for him.”

“Patrick plays quickly mentally. I mean, he is a quick decision-maker. The ball doesn’t stick with him. If you give him opportunities to keep the ball moving, possessions don’t die with him,” Presti said. “I’m excited for (coach) Billy (Donovan) because one of Billy’s strengths is being creative, improvising.

“I just think that there’s a lot of interchangeable pieces to the team that he can — he has to sort out. I don’t know how those guys specifically will — will, what roles they will play, other than I’m pretty confident he (Patterson) is going to play an increased role.”

Patterson has played in the NBA eight seasons with four teams. He’s played in 559 career games and averaged about 23 minutes per game. He has score 4,064 points and pulled off 2,426 rebounds. He also has 635 assists, 331 steals and 272 blocked shots.

Quote of the Week: “He’s grinder who does a great job of using his hands to control the offensive linemen. He’s a hardworking player, who has a great work ethic. It was a little bit of a surprise to me that he picked UK. I thought he was maybe going to Purdue,” Springfield (Ohio) High School coach Maurice Douglas on defensive lineman Isaiah Gibson committing to UK.

Quote of the Week 2: “I was in my friend in Florida’s wedding a few years ago and he reminded me that they had to change the wedding date because he told his wife-to-be that I would not be there if it was on the day of a Kentucky football game,” Clinton County attorney Michael Rains on his streak of attending 121 straight UK home football games.

Quote of the Week 3: “He can really protect the rim. He can run up the floor. He can get up the floor, but he can keep the ball moving. He can keep possessions alive. He can switch, which I think used to be — now it’s a straight-up strategy. It used to be a last resort but now that’s how you’re neutralizing some other aspects of offense,” Oklahoma City Thunder general manager Sam Presti on having Nerlens Noel on the roster this year.