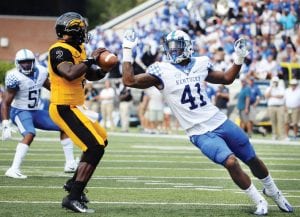 Mark Stoops believes Josh Allen (41) is one of the best outside linebackers in the U.S. (Vicky Graff Photo)

During a radio appearance on WJOX-FM in Birmingham last week, University of Kentucky head football coach Mark Stoops said he expects outside linebacker Josh Allen to not only be one of the best at his position in the SEC but also one of the best in the country.

“He’s a difference maker. He’s a guy that does a lot of things well,” Stoops said. “He’s good on his feet, he has good instincts and drops and leverage, playing pass defense but he’s also a dynamic pass rusher. He’s good in the run game. Josh really is the whole package.”

Allen is already projected as a first-round pick in the 2019 NFL draft and is on numerous preseason all-SEC teams. But Stoops also believes senior safety Mike Edwards is capable of a special season, too.

“ Mike Edwards has been around a long time, played a lot of football and he came back as well,” he said. “Physically he is in great shape.”

Smith said on the show that UK’s defense needs to “make a big jump,” but he believes he has the players to do that this year. 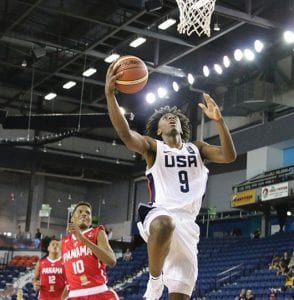 Tyrese Maxey may have been the best player on Team USA before he hurt his ankle. He says he would love for his Texas high school team to play in Kentucky next season. (USA Basketball Photo)

“We have some experience. We are getting some decent depth, so I feel like defensively we need to make a big jump as far as being more consistent. We’ve shown flashes and done good things at times but across the board, I’d like to see consistency there,” he said.

On offense, he said he’s counting on fifth-year receiver Dorian Baker, who missed last year with a knee injury, to supplement what running back Benny Snell can do.

“Hopefully, he’ll give us some play making ability at wide receiver because we need that,” Stoops said.

.Despite injuring his ankle in pool play win over Puerto Rico, Kentucky basketball commit Tyrese Maxey certainly made a big impression with his play for Team USA in the FIBA Americas Championship.

Maxey admitted playing with so many talented players was fun and enabled him to expand his game in various ways. However, he said he would have no trouble going back to Texas to play his senior season at South Garland High School.

“It doesn’t make it hard to go back at all. I like playing with my friends on the high school team,” Maxey said. “My senior season is going to be fun and I’m excited about it.”

At one time he had talked about reclassifying to the 2018 recruiting class but insists that no longer is his plan even though he could easily pass classes in time to make it happen.

“I don’t think he’ll reclassify. This class coming in (at Kentucky) is pretty guard heavy and it just wouldn’t make sense to have him forgo his senior year and head to Kentucky when there isn’t an immediate need for him on the team,” Rivals.com recruiting writer Krysten Peek said. “I’ve talked to other players as well and the general consensus is he’ll stay and finish his senior year.

“Tyrese is an excellent shooter and I know that was an area where Kentucky was hurting last year. If you had him and Tyler Herro on the court at the same time that would be a huge offensive threat with both players being almost automatic from the 3-point range.”

Herro is one of the freshmen guards already on campus. Another one is Georgia point guard Ashton Hagans, who reclassified from the 2019 class to the 2018 after graduating last week.

“ Tyrese is a pure shooting guard. He’s one of those players that can pullup for a 3 intransition and knock it down with confidence. He’s also explosive in the lane and can surprise people with his dunking. If you have Maxey and Hagans on the court at the same time, the defense can’t really help that much on Hagans since they’ll have to stay home on Maxey because he’s a shooter. That’s a great offensive scenario to have if you’re coach Cal.”

That’s a scenario Calipari likely will have in the 2019-20 season unless Hagans goes from high school junior to a one-and-done college player. It could happen, but doesn’t seem likely.

Maxey may have trouble finding challenges during his high school season. Most recruiting analysts believe his game is ready now to play for a major college team.

“When you look at high level guards like Maxey, there isn’t much that needs improvement but I would say he needs to get a little stronger and tighten up his ball handling,” Peek said. “Tyrese has such a quick release in his jump shot, it’s very hard to guard him already.

“Since he’s such a good shooter he can knock down a few 3’s and then get his defender up in the air with a fake and drive right by them the next time down the court. I love his intensity on defense and how quick he pushes the ball up the court after a turnover or in transition.”

Maxey admits his verbal commitment to Kentucky generated a lot of social media interest for him from UK fans.

“It is cool, I enjoy it,” Maxey said. “I don’t pay that much attention to it. I am happy with my decision and commitment.”

What if his team had an opportunity to play in a showcase event in Kentucky next season like the Marshall County Hoop Fest or McCracken County Mustang Madness?

“I don’t feel like it would put any pressure on my team,” Maxey said. “We could just go down and compete and have fun. One thing we do, we like to have fun on our team. I would love for that to happen and for all the Kentucky fans to get a chance to see me play. It would be cool to watch them and for them to watch my team.”

Peek said that attitude is why Kentucky fans are going to like Maxey so much when he does get to Lexington and why he will be the perfect fit for UK on and off the court.

“Tyrese is a great kid. He loves the game of basketball and he puts so much work into his own game. He has a great attitude and is easy to talk to,” Peek said. “I think he’ll be very popular in Kentucky.”

.Brooks Downing, founder/ president of Global Sports, believes Kentucky basketball fans are going to thoroughly enjoy having a chance to go to Las Vegas in December of 2019 when the Cats play two games in T-Mobile Arena. Kentucky will play Utah on Dec. 18, 2019, and three days later will take on Ohio State in the CBS Sports Classic.

“T-Mobile is a great, new arena. It hosts concerts, hockey. It has every bell and whistle you can imagine,” Downing said. “It’s right in the middle of the (Vegas) strip.”

Downing helps book numerous Division I college basketball games annually and has worked with John Calipari and UK assistant athletics director DeWayne Peevy, UK’s deputy director of athletics, to set up non-conference games to meet what the coach wants for his team each year.

“You are seeing the migration away from neutral site games to more destination locations where fans can have a great experience combined with a couple of premium games,” Downing said. “We believe the Las Vegas games are going to be quite an event. There is so much to do on and off the strip. Hoover Dam, Grand Canyon, great weather.”

Kentucky has played exhibition games in the Bahamas and will again this August. Kentucky has also played a regular-season game in the Bahamas. However, Downing admits prices there are out of range for some fans.

“MGM alone has 11 resorts in Las Vegas. There will be multiple locations for fans to stay,” Downing said. “You can stay at an average property to the latest and fanciest property and pay more. You have options and that’s good because the UK fan base comes from every demographic. This creates a trip that can meet budgets for families and we hope this start something new every other year that fans will really like.”

.Quote of the Week: “They listen and ask questions all the time. That’s one thing I like about them. They listen and they are hard workers and I don’t mind answering questions for them at all,” Kentucky sophomore guard Quade Green on John Calipari’s freshmen players who are now on campus.

Quote of the Week 2: “He has been by himself for his whole career, so he doesn’t need somebody else there. For him to kind of allow me to come in and be a small part of the show has been so much fun. We have really become good friends, which is I have enjoyed,” SEC Network analyst Laura Rutledge on being on air with Paul Finnebaum.