Stop for ice cream cone ends in the arrest of Isom man, 59 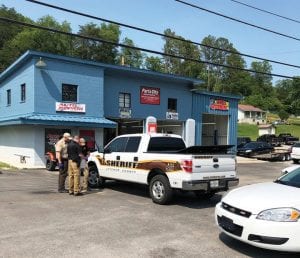 An Isom man wanted on an indictment warrant for first-degree possession of methamphetamine was arrested on Monday and charged again, this time with trafficking in methamphetamine.

Green Russell Davis, 59, of Slide Drive at Isom was lodged in the Letcher County Jail after his arrest.

Letcher County Sheriff Mickey Stines said he was returning to Whitesburg from recovering a stolen shotgun and had stopped at Halcomb’s Dairy Bar for an ice cream when he saw Davis at the other window of the drive-in.

“While I was standing there in line, I recognized Green Davis, who we had an indictment warrant on for possession of meth,” Stines said.

He said he placed Davis under arrest, but as he was trying to search him, Davis kept complaining loudly that he was hurting him. Stines said a crowd was gathering, so he called for assistance from deputies.

“When I started to pat him down, he had a container with three to five grams of meth in his front pocket,” Stines said.

He said Davis’s pocket tore as he struggled to prevent

Stines from searching him, and the container fell down his pants leg onto the ground, where he stomped it and busted it. Stines said when he looked in the vehicle, the butt of a .38 Smith & Wesson revolver was sticking out from under the seatback, along with another package containing 28 to 30 grams of meth. He said Davis also had a digital scale in his back pocket.

Stines said he charged Davis with trafficking in a controlled substance (methamphetamines), being a convicted felon in possession of a handgun and possession of drug paraphernalia.

The office served 96 warrants, and Stines said the vast majority involved meth, either as the underlying charge or as a new charge filed at the time of arrest.

“I’d say 95 percent of the people we arrest, whether it’s a traffic ticket arrest for failure to appear or whatever, once we arrest them we find meth,” he said.