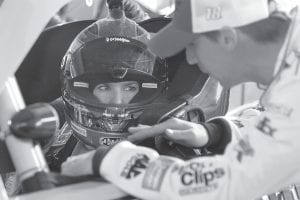 What did you do?

Chances are, if you’re an ardent NASCAR fan, you might have snickered at the very mention of her name. You probably grumbled about the attention she received all weekend, and your level of anger likely grew every time her bright GoDaddy green car was shown on TV.

It’s OK; Patrick learned to ignore the haters long ago.

If she paid attention, she never would have chased her dreams of being a professional race car driver. If she listened to the criticism, she probably would have hung up her firesuit years ago.

And now, with Twitter? The vile spewed at her in 140-character bursts, well, a weaker woman might crawl under the covers and never come out again.

But that’s not Patrick. She strong and she’s brave and she rolled into Darlington, NASCAR’s oldest superspeedway and the track known historically for separating the men from the boys, and didn’t back down from the challenge.

She’s not celebrated for any of that, at least not among the majority of racing fans. They instead fixate on her one win in 115 IndyCar starts, and now her struggles in NASCAR.

Sure, her progress in NASCAR has been slow, but people seem to forget that racing cars is hard. If just anyone could do it, that guy zipping down the interstate with his flashy rims could have run at Darlington on Saturday night.

Patrick didn’t pick Darlington for her second Sprint Cup Series start. The bright idea belonged to Tony Stewart, a three-time NASCAR champion generally regarded as one of the most versatile drivers on the planet. Even so, his 13-year resume lacks a Cup win in 20 career starts at Darlington.

But in Stewart’s desire to get Patrick ready for an eventual fulltime move to the Cup Series with Stewart-Haas Racing, her team owner picked some of the hardest tracks in the series for her 10-race schedule this season.

So that’s how she got to “The Track To Tough Too Tame,” where she moved back and forth between the Nationwide and Cup garages. She picked up her first career “Darlington stripe” in her first practice session, but so did fivetime champion Jimmie Johnson, who proudly tweeted a picture of his damaged car after smacking the wall in Friday’s practice.

Nobody thought Patrick would compete for a victory, and Stewart did a masterful job all weekend of lowering expectations to the point he basically said he didn’t expect anything at all.

“I want her to just as run as many laps as possible,” he said. “The more time she can spend on track the more experience she is going to get. The good thing running both divisions … and not have too many problems, then it’s a lot of valuable experience that when we come back here next year, doing it full-time, it should be very valuable.”

In the end, Patrick finished a respectable 12th in the Nationwide race, her Darlington debut. She was 31st the next night, six laps down from winner Johnson. But a 172-lap green-flag run put her a lap down early, and her mission from that moment on was to stay out of the way of traffic while also trying to turn fast laps and not let the track itself defeat her.

All in all, it was a successful weekend.

Sadly, not everyone views it that way.

There’s a strong resentment toward Patrick that really has to end. It’s meanspirited — sexist in some cases — and even though it doesn’t bother her, it is harmful to little girls everywhere who maybe dream of being race car drivers.

With Patrick in NASCAR now and Sarah Fisher, proud mother of one, now a team owner, this year will mark the first Indianapolis 500 since 1999 without an American woman in the field. Both of NASCAR’s fulltime female drivers, Patrick and Nationwide regular Johanna Long, are American. But they are the only two women competing regularly at NASCAR’s national level.

Just 19, Long has yet to experience the full wrath of an angry NASCAR nation. And she caught a bit of break this year, as many fans have championed her as the anti-Danica and the female driver worthy of some of Patrick’s exposure.

But the way Patrick gets treated, why would Long ever want that attention? Why would anyone?

You don’t have love Patrick, and just like any other driver, it’s OK to hate her, too. But she deserves respect for what she’s trying to do from the people watching from their couches and hiding behind a computer screen.

Patrick completed two races at Darlington last weekend. What did you do?