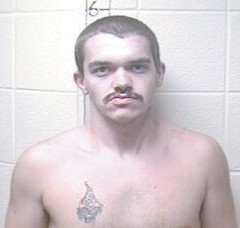 Toothman, 22, was photographed after being booked into the Letcher County Jail after his arrest Tuesday.

A Neon grocery store manager arrived at work early Tuesday morning to find a naked man covered in peanut butter and chocolate inside the store.

Andrew Allen Michael Toothman, 22, was “completely nude (and) wearing only a pair of black boots” while inside Neon Food World IGA, according to a citation written by Kentucky State Police Trooper D.B. White.

According to court documents, Toothman entered the store by breaking glass in the front door. He then smeared himself with peanut butter and chocolate taken from the shelves.

David Whitaker, store manager of the Food World IGA, said a department manager was startled when he opened the store and found Toothman inside.

Whitaker said Toothman appears to have spread the Skippy Natural peanut butter and chocolate on himself after entering Whitaker’s office through a door left unlocked the night before.

“He had sat down in my chair and his backside was covered in chocolate and peanut butter,” said Whitaker. “My chair is out beside the Dumpster.”

Whitaker said he also found on his office desk a peanut- butter covered framed print of a depiction of Jesus conversing with a businessman. Whitaker said the print, which includes verses from Psalms 1, was taken off of a wall in his office.

Whitaker said it appeared Toothman had taken a surveillance camera warning sign and attempted to “peanut butter it to the wall.”

The black boots Toothman was found wearing had been used by employees to remove snow from around the store and had been stored in Whitaker’s office.

Court documents also say that Toothman took bottles of Nyquil from a shelf and used them to spell out the word “sorry.” Toothman is also accused of discharging three fire extinguishers inside the store.

“ It was definitely the biggest mess I have seen,” Trooper White said.

White declined to comment on whether drugs or alcohol might have contributed to Toothman’s behavior, saying the case is still open and under investigation.

“He just made messes and we had to throw some product out,” said Whitaker.

“He lives across the road and we had never seen any trouble out him,” said Whitaker.

White said it is an open case and is still under investigation. Toothman is being held in the Letcher County Jail. Bond was set at $25,000 cash.