Store marks its ‘makeover’ with a grand re-opening 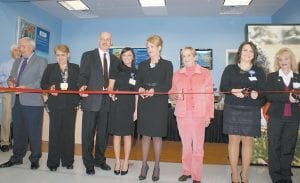 After 12 weeks of renovations, “the most extreme makeover” of Walmart stores is finished.”

“I could call it a remodel,” said Steve Allen, a Walmart store planning employee. “I would call it the most extreme makeover. This here was one of the toughest.”

The store remained open during the remodel in which items were moved numerous times until everything was finished. Space was even blocked off near the front of the store to make room for a Walmart pharmacy and a Pikeville Medical Center clinic.

In a well-organized plan, all old shelving, freezers, cash registers and flooring were removed from the Whitesburg Walmart and replaced with new materials.

“Other than the cin- derblocks itself and the employees, everything is new,” said Shawn Hubbard, Whitesburg Walmart assistant manager.

The store now has wider aisles, low-profile shelving, and a bright interior paint scheme and lighting. Hubbard said the improvements to the store “give customers a more eye-appealing place to shop, a much more pleasant environment, larger selections and better service.”

The electronics department expanded to include newer technology such as LED televisions.

“We have a bigger selection of grocery items to compete with local shopping centers,” said Hubbard.

During a re-grand opening ceremony Nov. 5, Hubbard praised the staff for their patience during the store remodel.

“It’s been a long time coming,” he said. “I know we have all worked hard. It looks great. I appreciate you guys getting through this without any accidents.”

“It’s a big thing to be able to expand and provide new services,” said Ward. “This is probably one of the best stores around. I am proud of the employees. They work hard.”

“They are such a wonderful corporate partner to this city,” said Craft. “I, too, am proud of this addition to Walmart. It’s a red letter day for the City of Whitesburg and Letcher County.”

“I believe this is the best Walmart there is,” said De- Priest.

“The store has been here for 26 years so we are ingrained in the community,” said Hubbard.

Tina Adams, Betty Frazier and Mickey Bentley were recognized for working at the Walmart store since its opening.

“They have seen some changes,” said Hubbard. “We have come a long way.”