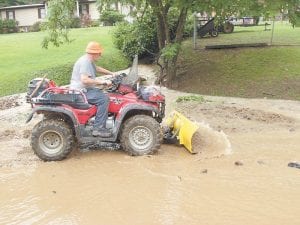 Above, Thornton resident Sammy Warf used a blade and an all-terrain vehicle to help clear mud and other debris from KY 1862 after a culvert that is turned upstream became stopped up during a heavy downpour on Sunday afternoon.

State and county road crews are still cleaning up damage which occurred across Letcher County during heavy weekend storms.

“We still have a lot of cleanup work to do,” said Letcher Judge/Executive Jim Ward.

Ward said storm damage was more widespread than it was during the June floods, but said there wasn’t a need to declare a state of emergency in the county.

Ward said county workers made it a priority to get roads cleared so ambulances and other emergency vehicles could travel.

“Right now we have everyone where they can get to their homes,” said Ward.

Ward said some roads are still rutted out and will need to be graded and graveled.

Billy Smallwood, superintendent of the state highway maintenance garage at Mayking, said Letcher County got two to three inches of water in about 30 minutes Sunday morning.

“None of our culverts and drain pipes could handle that amount of water in such a short period of time,” said Smallwood. “Then the creeks started overflowing because of runoff from other streams.” 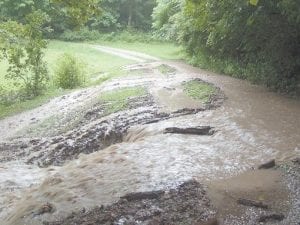 At right, a stream which is normally dry at this time of year overflowed its banks and washed out a road on Thornton. (Eagle photos)

“We closed KY 805 there with the help of the Neon and Jenkins fire departments,” said Smallwood. “When the water receded, our crew began the cleanup process, opening clogged drain pipes as well as private drains if water and debris are coming onto a state road because a private drain is clogged.”

Smallwood said state road crews did not replace any drain pipes or culverts.

“They weren’t damaged, just stopped up,” said Smallwood. “We still have to clean out ditch lines on some roads. Our goal on Sunday was to keep the roads open and get KY 805 re-opened. It is not possible to work on a road while there is still water standing on the pavement. We have to wait until the rain stops and the water recedes.”

Schoettmer said the difference in rainfall amounts from the two Whitesburg observers can be explained in that “heaviest rains usually fall in the heaviest storms, which means that a stronger storm or two probably moved over Whitesburg, but missed the area to the southeast of Whitesburg.”

Schoettmer said the forecast for the rest of July is wet.

“A few instances for heavy rain will certainly be possible which could drive the rainfall totals up quite a bit,” said Schoettmer. “It will be interesting to see where we end up when the month is over.”