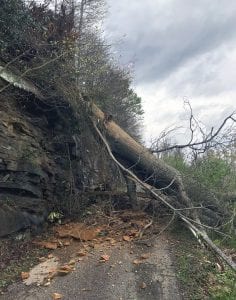 ROADBLOCK — Fallen trees like this one leading to the Mayking Head Start building at the mouth of Cram Creek must be moved with heavy equipment before electricity can be restored and roads re-opened. This tree knocked three transformers off a power pole on its way down.

Cleanup is continuing after high winds hammered Letcher County and much of eastern Kentucky on Sunday night, knocking out power to more than 59,000 homes — 7,723 of them here — and leaving uprooted trees and damaging winds in its wake.

More than 39,000 were still without power late Tuesday, with more than 5,632 Letcher County homes still in the dark. Kentucky Power said in a release that it will take “several days” to restore power to everyone in the Letcher, Knott, Perry, Pike, Floyd and Leslie county area, the area hardest hit by the winds.

The National Weather Service in Jackson recorded a wind gust of 79 miles per hour on top of Dorton Mountain in southern Pike County during the event Sunday night, but meteorologist Jane Marie Wix cautioned that the figure is almost certainly much higher than average because of the location of the weather station. Winds elsewhere in eastern Kentucky were in excess of 40 miles per hour. There are no wind gauges in Letcher County, but based on damage Wix said the winds were most likely 60 to 65 miles per hour. 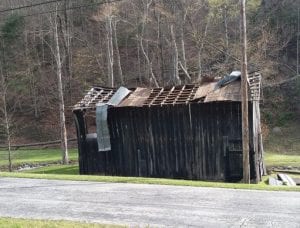 AN OLD BARN AT GARNER MOUNTAIN was nearly blown down by high winds during the storm Sunday night. Most of the roof and the boards on one side were missing Monday morning.

“There were at least 60-mile-perhour winds. I feel comfortable in saying that,” Wix said.

The wind was not accompanied by severe storms, though there was some lightning and heavy rain. Instead, the wind was in advance of a strong cold front that was expected to bring freezing temperatures, snow and frost to the area early this morning (Wednesday).

Letcher County Judge/Executive Terry Adams said county workers and volunteers had cleared most of the county roads by Tuesday evening, but there were some trees Kentucky Power would have to remove because they are lying on electric lines. He said the damage was widespread over the county, with heavy damage along Highway 7 South and North, Kingscreek and Elk Creek. On Stampers Branch at Isom, he said the road had been blocked by trees in five different locations.

Adams, who lives on Garner Mountain at Isom, said he was home when the wind hit, snapping off trees and utility poles, and tearing down utility lines.

“It was the worst storm and the worst wind I’ve ever seen on Garner Mountain, and I’ve lived here all my life,” he said. “I figured any minute the windows were going to break out. We could feel the whole house shaking.”

On Monday, Kentucky Power Co. crews found approximately 100 broken power poles including damage to cross arms, transformers and other pole equipment and miles of downed wire. There are numerous instances where trees outside of maintained rights-of-way brought down poles and lines and in some cases blocked roads causing accessibility issues. As weather allows, helicopters are assessing damage on some of the large transmission lines in the area that are also out of service.

One helicopter had to sit down in the parking lot at Letcher Elementary and Middle School because the gusty conditions Monday.

“While the number of customers without power is improving, because the damage is so extensive and widespread, total restoration will is still several days away,” the company’s release said.

On KY 7 just south of Isom, rafters were torn out of the concrete block on Croucher’s Service Center, folding the roof back and exposing the entire office to the elements. On Wendy Ridge, a tree uprooted by the wind landed on a mobile home, but no one was home. Just North of Blackey, volunteer firefighters cleared multiple trees that had blocked KY 7 near Frog Pond.

Despite torrential rains after the first winds hit, Adams said flooding had not been a problem. Downed trees caused most of the trouble.

“We got most of the roads cleared, the county roads,” Adams said. “There are still some that the power company’s got to work on. They’ve got some trees in the power lines. We’ve got most of them passable, but we’ll have to clean up some.”