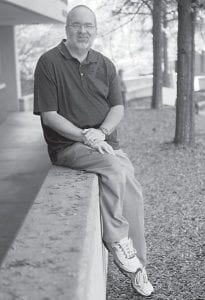 A story by Calton W. Hughes has been chosen to appear in the publication “Chicken Soup for the Soul: The Dating Game.”

Hughes is a professor at Southeast Kentucky Community and Technical College. The book will be in bookstores by the Christmas season. D’ette Corona, assistant publisher of the book series, told Hughes that only a small percentage of the submitted stories make it into print.

Hughes said he received inspiration and guidance for his story from Tracy Crump, a freelance writer who has been published in numerous Chicken Soup books. “This past summer when I attended the Kentucky Christian Writers Conference I took part in a workshop taught by Ms. Crump. That’s where I found out about the book and about the process of writing and submitting my work to Chicken Soup,” he said.

The book series was created by motivational speakers Mark Victor Hansen and Jack Canfield. They are editors of the books along with Amy Newmark. Chicken Soup books are published and distributed by Simon and Shuster.

Hughes said he had read several of the Chicken Soup books, including “Chicken Soup for the Christian Soul” and “Chicken Soup for the Father and Son Soul,” which contained a story by Crump. He said when he learned of a forthcoming book and its title “The Dating Game,” he received word that stories were being accepted. He quickly set out to write the story. “I thought of the situation of how my wife and I met, so I decided to try my hand at putting that story to paper,” he said. “Tracy proofed my story and gave me advice and then I submitted the story. I have learned that Chicken Soup receives thousands of submissions for each book, and one must go through two rounds of cuts. I kept receiving e-mails that I had made the cut and was encouraged, and last week I got the mail that I had made it into the book.”

Hughes’s story, “Grocery Store Cupid,” details how his brother-in-law Jess, who at the time worked at a grocery store in Cumberland, “fixed” him up with the woman, Kathy, who became his wife nearly 20 years ago.

A writer since his days as a junior high school student in Jenkins, Hughes credits his teacher, Robert Cox, now a professor at SKCTC, with inspiring him to write and to develop his talents. “He nurtured my talent and love for writing throughout high school and my first college English course,” he said. “In college at Morehead State, I wrote for the student newspaper, and, in the early 1990s, I wrote a column for the Harlan Daily Enterprise. After a break in writing, I began taking the craft much more seriously when I became a Christian 15 years ago.”

According to Hughes, through his writing he strives to “bring light and beauty to the world.” He mentioned that Chicken Soup books are not considered Christian books. “However, their goal is to encourage and to inspire people. I do some writing for Christian ministry, but my works have also appeared in secular publications such as Kentucky Monthly.”

He has been on the faculty of SKCTC since 1990. He resides in Cumberland with his wife Kathy and their sons, Noah and Ethan.