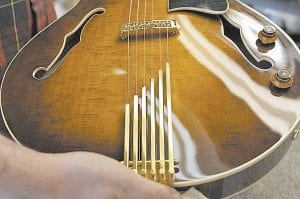 Back in the days when industry of all kinds began to flourish in Michigan, Gibson built a guitar factory in Kalamazoo.

The year was 1917. The factory at 225 Parsons St. was a “daylight” building, with large, high windows and a smokestack with the company’s name set in white bricks.

Over the years, skilled crafters built thousands of instruments there: mandolins, banjos and guitars, including the venerated Les Paul solid-body electric guitar. They kept producing fine instruments even as the firm was sold to one out-of-state interest, then another.

But in 1974, Gibson built another plant in Nashville, Tenn. And in the fall of 1984, Gibson closed the Kalamazoo plant.

That might have been the end of the story about guitar production in Kalamazoo, except for a handful of dedicated craftsmen who simply didn’t want to move south.

“I married here and built a place,” said Marvin Lamb, a Gibson craftsman and plant supervisor. “I’d lived in Michigan and it became home.” 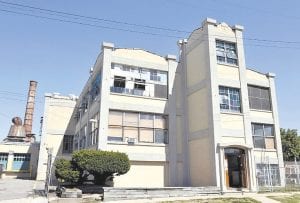 James Deurloo, Gibson’s plant manager, remembers sitting with former Gibson colleague Bruce Bolen on a boat in Lake Michigan off of South Haven and talking about the possibilities of opening a new guitar shop. He recalls taking notes on a restaurant placemat. Deurloo, Lamb, and a third partner, J.P. Moats, opened Heritage Guitar Inc. in April 1985.

“We didn’t pick the easy thing to do, I’ll tell you that,” Deurloo said.

But at 73, he’s proud of what they’ve accomplished.

“We’ve built a good company with a good name. We’ve built an instrument that people seek out,” he said.

This year, Heritage Guitar’s 20 full- and part-time employees are expected to produce about 1,000 electric guitars.

The firm sells 25 different guitars through a network of dealers in the United States, Europe, Asia, Australia and New Zealand. Dealers include Lansing’s Elderly Instruments.

Suggested retail prices of Heritage guitars range from $2,570 for the H-137 Second Edition to $8,960 for the Super Kenny Burrell, named for the Detroit-born jazz artist. Buyers can customize instruments as well.

Deurloo said about 70 percent of Heritage business is export; the company’s guitars sell particularly well in Japan as well as Europe. Heritage has a booth at twiceyearly meetings of the National Association of Music Merchants where it introduces each year’s product line.

S.J. “Frog” Forgey, leader of the longtime local band Frog and the Beeftones, also works at Elderly Instruments. He has a Heritage of his own, an H-535 with a sunburst pattern. He said many Heritage guitars are comparable to Gibson models, but sell for less; jazz models are most popular at Elderly.

“They’re dandy guitars,” he said. “For us, we do much better with their jazz boxes than anything else.”

At the Heritage plant, a rack of prototype guitars occupies a corner of the conference room. There’s no production line; the work of crafting a guitar is too slow and painstaking for that.

It takes about three months to make a single instrument: “Two if we’re really in a hurry,” Deurloo said. A number of guitars are in various steps of the process on any given day.

Slabs of mahogany wait in a far back corner of the plant for their turn to be shaped into solid guitar bodies. Sheets of tiger and curly maple are machine and hand-carved to create a convex surface on the finished instrument. Some jazz guitars are faced with sitka spruce instead.

“Each piece of wood has its own resonant frequency,” Deurloo said.

A guitar-shaped steel stove is used to shape the strips of wood that form the outside edges of each guitar. The strips are soaked in water, laid on the form, heatset into shape and dried.

It takes many more steps to finish fashioning the guitar body. Then necks, decorated with inlays, and headstocks, with the words “The Heritage,” are added. The guitars are sanded and lacquered; lacquering alone takes days. Finally, electronics and strings are added and the instruments are ready to be shipped out.

Workbenches are covered with guitar parts and tools; squeeze bottles of thick, white glue have prominent spots on many of the benches. The adhesive is important to the quality of the finished guitar.

“You don’t want to save any money on glue,” Deurloo said.

In a room near the plant’s front door, a row of brand-new guitars — red, black and shades of amber — wait, draped in old bedsheets, to be shipped to Florida, New Jersey, Germany and beyond, where waiting customers will open their cases and play.

“They seem to appreciate our efforts, and there is a lot of satisfaction in that,” Deurloo said. “We’re also happy to make a place for our employees to work.”